Quote:
Le notti bianche (White Nights) occupies a central position within Luchino Visconti’s body of work. In appearance at least, it consummates a break with the neorealism of the 1940s and early 1950s and looks forward to The Leopard (1963), in its rendering of subjectivity by visual style, and to Vaghe stelle dell’orsa (Sandra; 1965), in its dependence on metaphor as a structuring device. But appearances can be deceptive, for in 1960, Visconti returned to realism with Rocco and His Brothers, and in its way, Le notti bianche is also fundamentally a realist film, in spite of its excursions into fantasy. END_OF_DOCUMENT_TOKEN_TO_BE_REPLACED

Visconti’s retelling of the Electra story starts with Sandra/Electra (Cardinale) returning to her ancestral home in Italy – and reviving an intimate involvement with her brother (Sorel) which troubles her naive American husband (Craig) – on the eve of an official ceremony commemorating the death of her Jewish father in a Nazi concentration camp. As ever with Visconti, he is ambivalently drawn to the decadent society he is ostensibly criticising; and Armando Nannuzzi’s camera lovingly caresses the creaking old mansion, set in a landscape of crumbling ruins, where the incestuous siblings determine to wreak revenge on the mother (Bell) and stepfather (Ricci) who supposedly denounced their father. Something like a Verdi opera without the music, the result may not quite achieve tragedy, but it looks marvellous. The title, culled from a poem by Leopardi, has been better rendered as ‘Twinkling Stars of the Bear’. END_OF_DOCUMENT_TOKEN_TO_BE_REPLACED

Gino, a young and handsome tramp, stops in a small roadside inn run by Giovanna. She is unsatisfied with her older husband Bragana : she only married him for money. Gino and Giovanna fall in love. But Bragana is inhibiting for their passion, and Giovanna refuses to run away with Gino. END_OF_DOCUMENT_TOKEN_TO_BE_REPLACED

Quote:
This lush, Technicolor tragic romance from Luchino Visconti stars Alida Valli as a nineteenth-century Italian countess who, during the Austrian occupation of her country, puts her marriage and political principles on the line by engaging in a torrid affair with a dashing Austrian lieutenant, played by Farley Granger. Gilded with ornate costumes and sets and a rich classical soundtrack, and featuring fearless performances, this operatic melodrama is an extraordinary evocation of reckless emotions and deranged lust, from one of the cinema’s great sensualists. END_OF_DOCUMENT_TOKEN_TO_BE_REPLACED

Quote:
In this adaptation of the Thomas Mann novel, avant-garde composer Gustave Aschenbach (loosely based on Gustav Mahler) travels to a Venetian seaside resort in search of repose after a period of artistic and personal stress. But he finds no peace there, for he soon develops a troubling attraction to an adolescent boy, Tadzio, on vacation with his family. The boy embodies an ideal of beauty that Aschenbach has long sought and he becomes infatuated. However, the onset of a deadly pestilence threatens them both physically and represents the corruption that compromises and threatens all ideals. END_OF_DOCUMENT_TOKEN_TO_BE_REPLACED

Quote:
This brooding, operatic movie about Nazism makes Cabaret look like wholesome family fare. The family in The Damned is a symbol of German society circa 1934. The Krupp-like steel magnate Baron von Essenbeck represents the spineless establishment. The Nazis kill the baron, then frame one heir apparent, a socialist (married to the stunning Charlotte Rampling). A bearish, boorish Essenbeck representing the SA, the Nazis’ early goon squad, takes the reins. But Hitler murdered the SA in the 1934 “Night of the Long Knives,” providing The Damned with its bravura action scene, a Nazi massacre at a gay SA orgy. The winning Essenbeck is the murderous, pedophilic, transvestite, mother-rapist Martin (sharp-featured Helmut Berger), who represents Nazism. Though he’s better in director Luchino Visconti’s 1971 Death in Venice, Dirk Bogarde is classy as Martin’s stepdad. The Damned got an Oscar screenplay nomination, and Vincent Canby called Berger’s Martin “the performance of the year.” END_OF_DOCUMENT_TOKEN_TO_BE_REPLACED 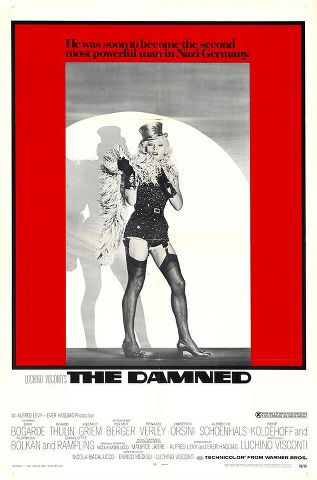 The Damned has often been regarded as the first of Visconti’s films described as “The German Trilogy”, followed by Death in Venice (1971) and Ludwig (1973). Henry Bacon (1998) specifically categorizes these films together under a chapter “Visconti & Germany”. Visconti’s earlier films had analyzed Italian society during the Risorgimento and postwar periods. Peter Bondanella’s Italian Cinema (2002) depicts the trilogy as a move to take a broader view of European politics and culture. Stylistically, “They emphasize lavish sets and costumes, sensuous lighting, painstakingly slow camerawork, and a penchant for imagery reflecting subjective states or symbolic values,” comments Bondanella. END_OF_DOCUMENT_TOKEN_TO_BE_REPLACED