Synopsis:
Director Mou Tun-fei came to international attention as director of the controversial Man Behind The Sun in 1988. But years prior, he was known for this unremitting tale of kung-fu sadism. Yueh Hua, co-star of Clan Of Amazons and Clans Of Intrigue, tears up the screen as a corrupt magistrate, so obsessed with finding a hidden treasure that he buries his daughter alive, setting off a frenzy of destruction. END_OF_DOCUMENT_TOKEN_TO_BE_REPLACED

Synopsis:
The story concerns the misadventures of Wong Fei Hung as he accidentally becomes involved with the affairs of the British consul, who is smuggling ancient Chinese artifacts out of the country. Wong Fei Hung battles the henchmen of the consul using the Zui Quan (“Drunken Boxing”) style of martial arts. An added twist is that Wong Fei Hung becomes a more powerful fighter by consuming alcohol. But when he consumes too much alcohol, he becomes very sluggish, drunk, and unable to fight. END_OF_DOCUMENT_TOKEN_TO_BE_REPLACED

Synopsis:
Lo Wei was twenty years into his notable career when he wrote, directed, and co-starred in this tale of a murdered lord, a hired killer who unknowingly becomes friends with his intended victim, a vicious bandit chief, a kind blind woman, and a death duel which explodes into an ambush and then a slaughter. Star Yueh Hua would go on to an exceptional acting career, while Lo himself would give both Bruce Lee and Jackie Chan their “big breaks.” END_OF_DOCUMENT_TOKEN_TO_BE_REPLACED

In the fifth century, constant civil war scars western China. To escape death, Ti, a young scout, jumps through a crevice in the Zu mountains where he meets and becomes the apprentice of Ting Yin, a spiritual man with great fighting powers. They encounter a monk, Hsiao Yu, also a great fighter and a good man, but unfriendly to Ting. Because Ting and Hsiao can’t work together, it falls to Ti to team with Hsiao’s acolyte Yi Chen: they have 49 days to travel far to claim two swords that are the only weapons that can defeat the Blood Demon, who has decided the wreak havoc on the world. They get help from Long Brows, Ting falls in love with a countess, and civil war still rages. END_OF_DOCUMENT_TOKEN_TO_BE_REPLACED

A 19C river town is under lockdown by Qing government troops. Word has reached the emperor that a rebel group (known as the Tiandihui) has hidden its children, including the leader’s son Ermao, in the town. Who can be trusted and who is a spy? Who is the real Ermao? END_OF_DOCUMENT_TOKEN_TO_BE_REPLACED

In this movie, Bruce Lee is a very famous martial-arts master who stars in many films. After an unsuccessful murder attempt against him, everyone thinks his is dead, but he’s just hiding, preparing his revenge… END_OF_DOCUMENT_TOKEN_TO_BE_REPLACED 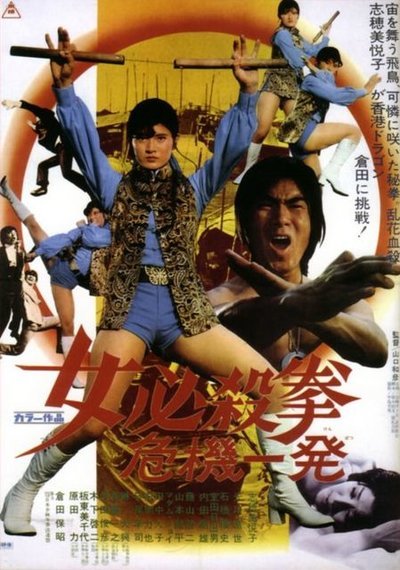 Synopsis:
The daughter of a powerful man, Birei, disappears and Koryu is sent to Tokyo to investigate. She soon discovers that Birei was kidnapped in a gangster’s diamond smuggling ring that is very close to home. Soon she is surrounded by the gangster’s army of martial arts experts… END_OF_DOCUMENT_TOKEN_TO_BE_REPLACED