Plot:
In this dark drama, a young American is on his way to take his final vows as a priest when he encounters a troubled nightclub singer with a checkered past. He honestly wants to help her and soon falls for her and finds himself tempted by her seductive ways. END_OF_DOCUMENT_TOKEN_TO_BE_REPLACED

Quote:
This superior melodrama with a darkly comic tinge came out at a time when Mitchell Leisen’s career was running hot after a series of successes including films like Easy Living, Midnight, and Remember the Night. It was also the last film Billy Wilder (in partnership with Charles Brackett) was content with just writing the screenplay for. He was supposedly so annoyed by the way Leisen took liberties with his script that he resolved never to cede directorial control again. END_OF_DOCUMENT_TOKEN_TO_BE_REPLACED

Synopsis:
Just before Christmas, Lee Leander is caught shoplifting. It is her third offense. She is prosecuted by John Sargent. He postpones the trial because it is hard to get a conviction at Christmas time. But he feels sorry for her and arranges for her bail, and ends up taking her home to his mother for Christmas. Surrounded by a loving family (in stark contrast to Lee’s own family background) they fall in love. This creates a new problem: how do they handle the upcoming trial? END_OF_DOCUMENT_TOKEN_TO_BE_REPLACED

The Grim Reaper (Frederic March) takes the form of a Prince in an attempt to relate to humans and, along the way, also learns what it is to love. END_OF_DOCUMENT_TOKEN_TO_BE_REPLACED

Mitchell Leisen – Murder at the Vanities (1934)

Quote:
While musical revue “The Vanities” captivates audience on its opening night, a murder investigation secretly takes place backstage. a lavish backstage extravaganza that’s half musical and half who-dunnit. As the mystery is downright silly, the appeal is all in the attempts at comedy and the staging of a half-dozen song and dance numbers. END_OF_DOCUMENT_TOKEN_TO_BE_REPLACED

Review Summary
A post-WWII romantic comedy that explores the effects of the war on American marriage, this film stars Fred MacMurray and Paulette Goddard as Peter and Mary Morley, a pair of constantly fighting attorneys. They are on the verge of breaking up their marriage when the war breaks out. Mary goes into the Women’s Army Corps, and when she returns after the war, she’s no longer sure if she wants a divorce. In her absence, however, Peter has hooked up with Gloria Fay (Arleen Whelan), who demands that he sign the divorce papers. In turn, Jack Lindsay (MacDonald Carey, one of Peter’s clients, has fallen for Mary, but he doesn’t want to move in with her until the divorce is official. ~ Michael Betzold, All Movie Guide END_OF_DOCUMENT_TOKEN_TO_BE_REPLACED 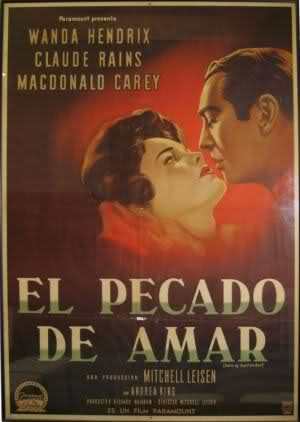 Plot
Though her acting range was limited, Wanda Hendrix was cute as all get out, and this cuteness is pretty much all that’s required from her in Song of Surrender. The film is set in a small town of the early 1900s. Hendrix is cast as Abigail Hunt, the young bride of fiftyish museum curator Elisha Hunt (Claude Rains). Their connubial bliss is threatened when attorney Bruce Eldridge (Macdonald Carey) falls in love with Abigail, and she with him. When her neighbors discover her indiscretions, Abigail is driven from town. It is only during a near-tragedy that Abigail realizes that her true place is with her aging husband. Still, the script manages to wangle a happy ending for everyone concerned. Of interest in Song of Surrender is the utilization within the plotline of several vintage Enrico Caruso recordings. END_OF_DOCUMENT_TOKEN_TO_BE_REPLACED