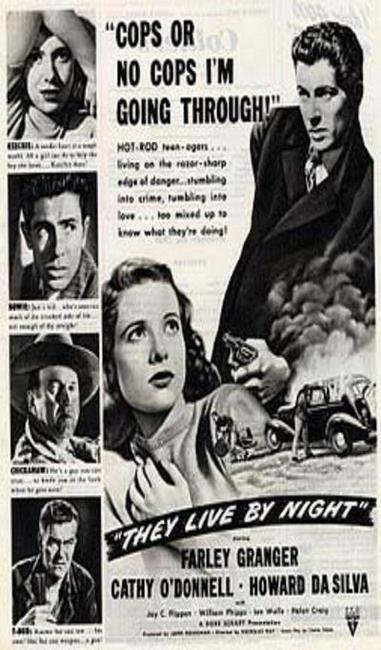 John Greco wrote:
Three men escape from prison, two seasoned bank robbers T-Dub (Jay C. Flippen) and Chickamaw (Howard Da Silva) along with young Bowie (Farley Granger) who was innocently convicted of murder. The three men rob a bank. When Bowie is injured he is brought to Chickamaw’s brother’s place where he meets Keechie (Cathy O’Donnell), Chickamaw’s tomboyish niece. After another bank job, the young lovers take off to get away from Bowie’s two thug partners and a life of crime. Unlike Bowie, his two cohorts quickly blow their share of the money and want Bowie for another bank job which goes bad resulting in T-Dub’s death. Bowie and Keechie are again running only this time instead of running to a new life they are running from the law and straight toward a tragic end. END_OF_DOCUMENT_TOKEN_TO_BE_REPLACED 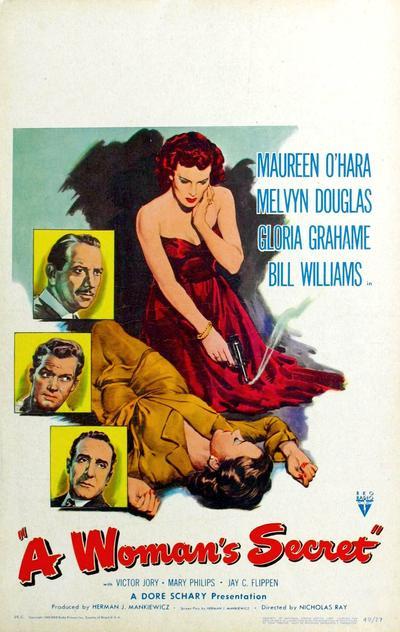 Synopsis:
Susan is laying in the hospital with a bullet near her heart. Marian has told the police that she shot Susan in a rage as Susan was giving up her singing. Marian and Luke found Susan when she was a failure. A singer with a limited range, she was a diamond in the rough to which Marian and Luke taught how to walk, dress and talk. With the singing lessons, Marian had hoped that she would have the career that Marian would have had if she had not lost her voice. Even thought Susan is a scatterbrain girl, Luke does not believe that Marian would or was capable of shooting her. Luke hopes that Detective Fowler will be able to find out the truth and free Marian. END_OF_DOCUMENT_TOKEN_TO_BE_REPLACED 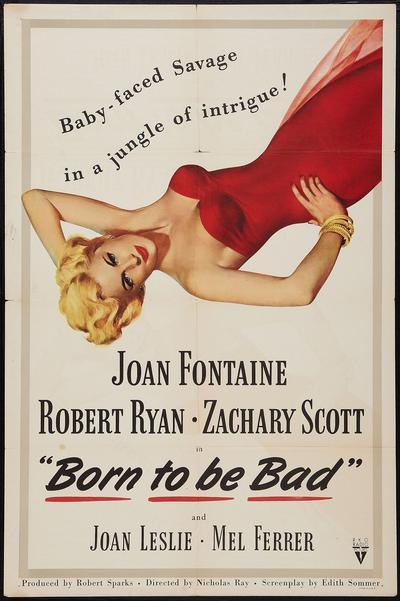 Synopsis:
One of the most oft-revived of the pre-Technicolor Nicholas Ray efforts, Born to Be Bad offers us the spectacle of Joan Fontaine portraying a character described as “a cross between Lucrezia Borgia and Peg O’ My Heart”. For the benefit of her wealthy husband Zachary Scott and his family, Fontaine adopts a facade of wide-eyed sweetness. Bored with her hubby, she inaugurates a romance with novelist Robert Ryan. All her carefully crafted calculations come acropper when both men discover that she’s a bitch among bitches. She might have gotten away with all her machinations, but the censors said uh-uh. Originally slated for filming in 1946, with Henry Fonda scheduled to play the Robert Ryan part, Born to Bad was cancelled, then resurfaced as Bed as Roses in 1948, this time with Barbara Bel Geddes in the Fontaine role. RKO head Howard Hughes’ decision to replace Bel Geddes with the more bankable Fontaine was one of the reasons that producer Dore Schary left RKO in favor of MGM. Based on Anne Parrish’s novel All Kneeling, Born to be Bad is so overheated at times that it threatens to lapse into self-parody; though this never happens, the film was the basis for one of TV star Carol Burnett’s funniest and most devastating movie takeoffs, Raised to be Rotten END_OF_DOCUMENT_TOKEN_TO_BE_REPLACED 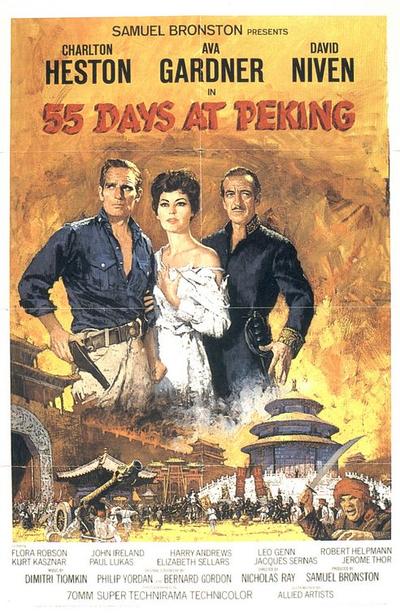 from rottentomatoes:
Samuel Bronston produced this extravagant blockbuster, shot in Super Technirama 70. Nominally directed by Nicholas Ray (who makes a brief appearance as the U.S. ambassador), Ray was taken off the film and replaced by the more pliable directorial touches of Andrew Marton. Charlton Heston stars as Maj. Matt Lewis, the leader of an army of multinational soldiers who head to Peking during the infamous Boxer Rebellion of 1900. As the film unfolds, the foreign embassies in Peking are being held in a grip of terror as the Boxers set about massacring Christians in an anti-Christian nationalistic fever. Inside the besieged compound, the finicky British ambassador (David Niven) gathers the beleaguered ambassadors into a defensive formation. Included in the group of high-level dignitaries is a sultry Russian Baroness (Ava Gardner) who takes a shine to Lewis upon his arrival at the embassy compound with his group of soldiers. As Lewis and the group conserve food and water and try to save some hungry children, they await the arrival of expected reinforcements, but the tricky Chinese Empress Tzu Hsi (Flora Robson) is, in the meantime, plotting with the Boxers to break the siege at the compound with the aid of Chinese recruits. END_OF_DOCUMENT_TOKEN_TO_BE_REPLACED 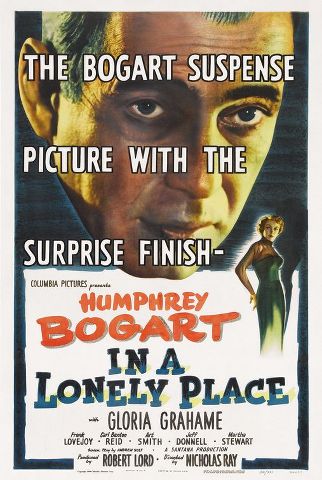 Quote:
Screenwriter Dixon Steele, faced with the odious task of scripting a trashy bestseller, has hat-check girl Mildred Atkinson tell him the story in her own words. Later that night, Mildred is murdered and Steele is a prime suspect; his record of belligerence when angry and his macabre sense of humor tell against him. Fortunately, lovely neighbor Laurel Gray gives him an alibi. Laurel proves to be just what Steele needed, and their friendship ripens into love. Will suspicion, doubt, and Steele’s inner demons come between them? END_OF_DOCUMENT_TOKEN_TO_BE_REPLACED 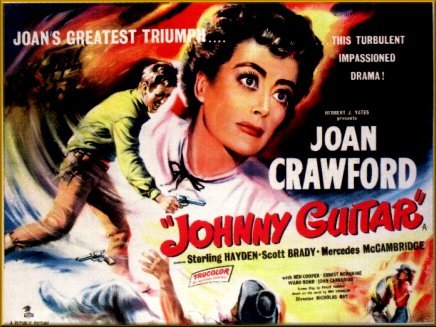 This one-of-a-kind western stars Joan Crawford as a saloon owner battling the local townspeople headed by Emma (Mercedes McCambridge), the local sexually repressed, lynch-happy female rancher out to frame her for a string of robberies. The title character played by Sterling Hayden is a guitar-strumming drifter with a dark past who was once in love with Crawford and has been offered a job in her saloon. Nicholas Ray’s epic western is considered on the most original westerns of all time – the women are far tougher than the men and some saw in the film a bizarre allegory for the McCarthy era Red Scare. In addition to the stars, Johnny Guitar is well stocked with great supporting players, including Ernest Borgnine, Scott Brady, Ward Bond, Paul Fix, Royal Dano and John Carradine. Classic score title song written by Peggy Lee and the film’s composer Victor Young and sung by Peggy Lee. END_OF_DOCUMENT_TOKEN_TO_BE_REPLACED 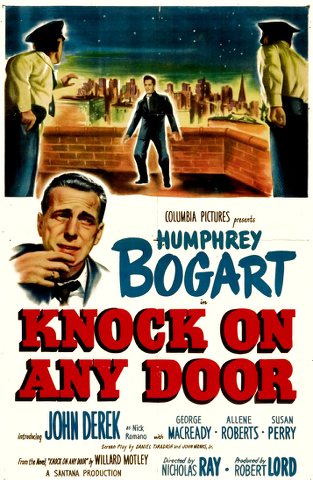 Quote:
Andrew Morton is an attorney who made it out of the slums. Nick Romano is his client, a young man with a long string of crimes behind him. After he lost his paycheck gambling, hoping to buy his wife some jewelry, she announced she was pregnant, Later he finds her dead from suicide. When he turns again to robbery he’s caught by a cop and Nick pumps all his bullets into him in frustration. Morton’s appeal to the court emphasizes the evils of the slums. END_OF_DOCUMENT_TOKEN_TO_BE_REPLACED