Ovidio G. Assonitis – Chi sei? aka The Devil Within Her aka Beyond The Door (1974)

IMDB User wrote:
I won’t waste time summarizing the plot for this film since the other users have done quite a good job themselves. Basically, you’ve got just one more in a stream of films that cashed in on the success of William Friedkin’s 1973 classic “The Exorcist”. I can only recommend “Beyond the Door” to those who enjoy these types of movies. Director Ovidio G. seems to be the Italian version of William Girdler, who directed his own “exorcist” knock-off that same year with “Abby”, a blaxsploitation version that was actually taken out of theaters after two weeks due to a lawsuit filed by Warner Brothers for plagiarism. If I’m correct, “Beyond the Door” was also attacked by Warner Brothers but I’m not sure what the outcome of that one was. It did manage to stay in the theaters though and actually did good at the box office. “Beyond the Door” copies “The Exorcist” in almost every way and you will either hate it or love it. This time, instead of a young girl, we have Juliet Mills (Nanny and the Professor, Passions) who levitates, vomits, spins her head around, and curses like a sailor, saying things like “lick the whore’s vomit” in a demonic voice. END_OF_DOCUMENT_TOKEN_TO_BE_REPLACED 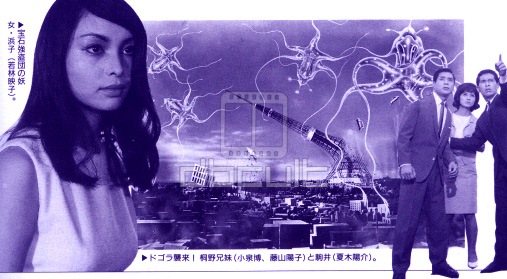 Quote:
In 1954, Akira Ifukube was asked by Toho to score Gojira (Godzilla), a giant monster film to be directed by Ishiro Honda. Many of Ifukube’s colleagues tried to convince him not to take the job, thinking the film would not be a success. Ifukube did not listen to his detractors and accepted the project. As a result, his score for Gojira has become one of the most famous film scores in history and propelled Ifukube to heights of fame that no other Japanese film composer has ever reached. Additionally, Ifukube regarded his Gojira music as the best score he had ever written for a motion picture. END_OF_DOCUMENT_TOKEN_TO_BE_REPLACED