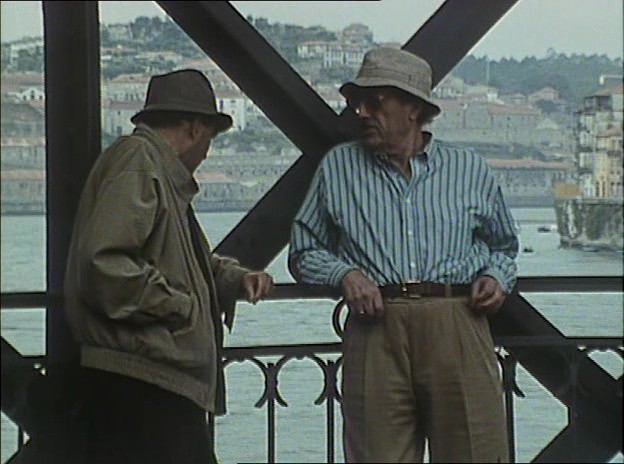 as usual with that “cinema, de notre temps collection” END_OF_DOCUMENT_TOKEN_TO_BE_REPLACED

Quote:
1920s. Vitalino, a small farmer from São Vicente sees his father die of the epidemic which decimated the country. Some years later, of all the brothers, Vitalino is the strongest and takes his father’s place in the house. But the village is too small for his aspirations and he decides to head to Brazil, leaving his sisters in charge of the household. In parallel with Vitalino’s story, If I Were a Thief… I’d Steal portrays the world of Paulo Rocha rummaging through his films and ghosts over the years. END_OF_DOCUMENT_TOKEN_TO_BE_REPLACED

Julio, aged nineteen, has just left the provinces to settle down in the outskirts of Lisbon. He lives there in a poor area with his uncle Raul and starts working as an apprentice shoemaker. At the shop, he gets to know Ilda, a young housemaid and regular customer. Ilda is pretty, joyful and modern and Julio falls for her. END_OF_DOCUMENT_TOKEN_TO_BE_REPLACED Quote:
The film traces the life and times of Wenceslau de Moraes (b. Lisbon 1854, d. Tokushima 1929), the great Portuguese writer who lived in the Far East. 1891: Moraes breaks with his mistress and leaves Portugal for Macao, never to return. 1895: While in Macao, he becomes fascinated by Japan, leaving his Chinese wife and their two children. 1912: Moraes is living and writing in Robe, in the south of Japan, as Portuguese Consul, with his Japanese wife Oyone. 1913-16: Deeply affected by the death of Oyone, Moraes quits his post and goes to live in poverty, near the tomb of his wife. However, he soon becomes involved with a young niece of Oyone’s, Ko-Haru, who eventually dies of tuberculosis. 1916-29: Moraes is transformed into a ghostly figure, wandering at night around the graves of Oyone and Ko-Haru. He writes his most mature works at this time, while his literary fame continues to grow in Portugal. 1929: Moraes dies under obscure circustances. END_OF_DOCUMENT_TOKEN_TO_BE_REPLACED