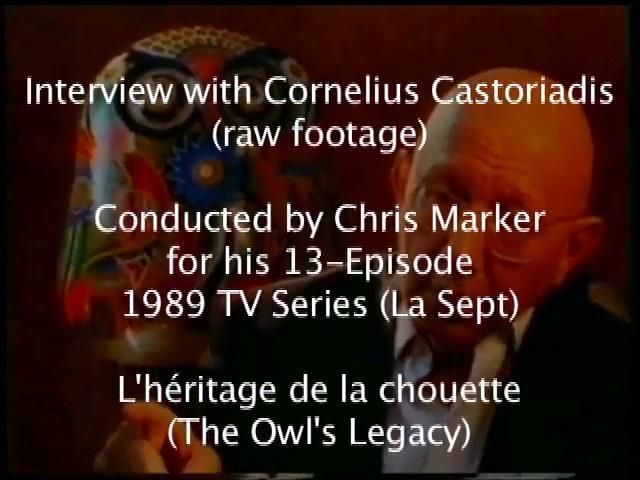 Quote:
This interview with Castoriadis was conducted in 1989 by famed filmmaker Chris Marker for Marker’s own television series L’héritage de la chouette (“The Owl’s Legacy”). Eighty-one minutes long, the raw footage originally recorded in French has been translated into English (via easy-to-read subtitles) and edited anonymously as a public service. Here, Castoriadis lays out and examines the contributions of ancient Greece to questions of contemporary relevance relating to democracy, politics, philosophy, art, poetry, economic and social reorganization, and the creative chaos that underlies all existence. END_OF_DOCUMENT_TOKEN_TO_BE_REPLACED 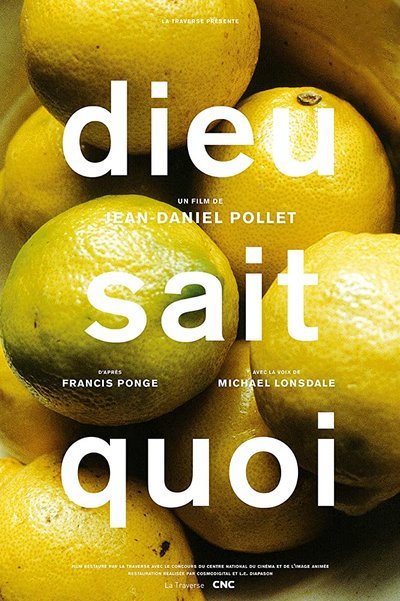 Dieu sait quoi can be described as a cinematographic essay managing to convey Francis Ponge’s approach to the world, his special relation between silent objects and speech, defining the space of life and knowledge. END_OF_DOCUMENT_TOKEN_TO_BE_REPLACED

Synopsis:
The story takes place in sixteenth century England. But men like Sir Thomas More, who love life yet have the moral fiber to lay down their lives for their principles, are found in every century. Concentrating on the last seven years of the English Chancellor’s life, the struggle between More and King Henry VIII hinges on Henry’s determination to break with Rome so he can divorce his current wife and wed again, and good Catholic More’s inability to go along with such heresy. More resigns as Chancellor, hoping to be able to live out his life as a private citizen. But Henry will settle for nothing less than that the much respected More give public approval to his headstrong course. END_OF_DOCUMENT_TOKEN_TO_BE_REPLACED

In the time of the Roman Empire’s waning, decadent, self-indulgent days, the Algerian-born Catholic convert Augustine was appointed Bishop of Hippo in Roman North Africa. Seeing his own time, with its widespread poverty, greed and materialism, the Vietnam War, reflected in this fifth-century world, Roberto Rossellini turned his series of present-tense histories to the figure of Augustine, the splendid result being Agostino d’Ippona. END_OF_DOCUMENT_TOKEN_TO_BE_REPLACED

F I L M I N F O
1. Samuel Beckett made a single work for projected cinema. It’s in essence a chase film; the craziest ever committed to celluloid. It’s a chase between camera and pursued image that finds existential dread embedded in the very apparatus of the movies itself. The link to cinema’s essence is evident in the casting, as the chased object is none other than an aged Buster Keaton, who was understandably befuddled at Beckett and director Alan Schneider’s imperative that he keep his face hidden from the camera’s gaze. The archetypal levels resonate further in the exquisite cinematography of Academy Award-winner Boris Kaufman, whose brothers Dziga Vertov and Mikhail Kaufman created the legendary self-reflexive masterpiece Man With a Movie Camera. Commissioned and produced by Grove Press’s Barney Rosset, FILM is at once the product of a stunningly all-star assembly of talent, and a cinematic conundrum that asks more questions than it answers. END_OF_DOCUMENT_TOKEN_TO_BE_REPLACED

‘Socrates’ Mirrors the Platonic Touch of Rossellini
Something more than wordplay is involved when one describes Roberto Rossellini’s “Socrates,” which opened yesterday at the New Yorker Theater, as the great Italian director’s most Socratic film, in his most Platonic style.

Although the movie was shot entirely in Spain with lots of correctly costumed extras, who walk around what look to be the freshly painted, spruced-up remains of the sets of Anthony Mann’s unfortunate “Fall of the Roman Empire,” it concedes no more than it absolutely must to the demands of a popular cinema that seeks access to the intellect through visual grandeur and primal emotions. END_OF_DOCUMENT_TOKEN_TO_BE_REPLACED