Quote:
At the height of the Cold War, the Soviet film industry set out to prove it could outdo Hollywood with a production that would dazzle the world: a titanic, awe-inspiring adaptation of Leo Tolstoy’s classic tome in which the fates of three souls—the blundering, good-hearted Pierre; the heroically tragic Prince Andrei; and the radiant, tempestuous Natasha—collide amid the tumult of the Napoleonic Wars. Employing a cast of thousands and an array of innovative camera techniques, director Sergei Bondarchuk conjures a sweeping vision of grand balls that glitter with rococo beauty and breathtaking battles that overwhelm with their expressionistic power. As a statement of Soviet cinema’s might, War and Peace succeeded wildly, garnering the Academy Award for best foreign-language film and setting a new standard for epic moviemaking. END_OF_DOCUMENT_TOKEN_TO_BE_REPLACED 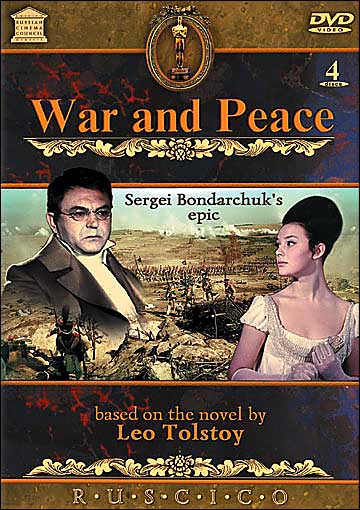 Like Tolstoy’s novel, this epic-length War and Peace is rough going, but worth the effort. Winner of the 1969 Academy Award for Best Foreign Language Film and widely considered the most faithful adaptation of Tolstoy’s classic, Sergei Bondarchuk’s massive Soviet-Italian coproduction was seven years in the making, at a record-setting cost of $100 million.

Bondarchuk himself plays the central role of Pierre Bezukhov, buffeted by fate during Russia’s tumultuous Napoleonic Wars, serving as pawn and philosopher through some of the most astonishing set pieces ever filmed.

Bondarchuk is a problematic director: interior monologues provide awkward counterpoint to intimate dramas, weaving together the many classes and characters whose lives are permanently affected by war.

Infusions of ’60s-styled imagery clash with the film’s period detail; it’s an anomalous experiment that doesn’t really work. Undeniably, however, the epic battle scenes remain breathtakingly unique; to experience the sheer scale of this film is to realize that such cinematic extravagance will never be seen again. END_OF_DOCUMENT_TOKEN_TO_BE_REPLACED