Exploring the art of Armenian portraitist Hakob Hovnatanyan, Parajanov revives the culture of Tbilisi of the 19th century. END_OF_DOCUMENT_TOKEN_TO_BE_REPLACED

Quote:
The feature length version of Andriesh (Kyiv Film Studio 1955) is a straight forward example of the Soviet fairytale film genre. In the film, the young shepherd Andriesh is charged with guarding the village’s flock of sheep. There Andriesh meets Voinovan, a bogatyr (hero) who gives the young boy his magic wooden flute. Black Storm, a wicked sorcerer who despises the flute’s joyous music, descends upon the village in human form, hypnotizes and kidnaps Voinovan’s beloved Liana, sets the village aflame, and steals its flock. Andriesh undertakes a journey to confront Black Storm and meets various individuals who help him, while Voinovan amasses an army of Haiduks (mercenary soldiers) with sun tempered maces to battle the sorcerer. END_OF_DOCUMENT_TOKEN_TO_BE_REPLACED

Orksana, talented student at the Ukrainian Academy likes Antonin whom she met in her youth. Here the love is less tumultuous in retrospect to “Pervyy Paren” (USSR, 1958) of the same Paradjanov, even if a certain formal expression of it remain. In this third feature of the Armenian filmmaker; the Second World war, one of the rare History adaptations of Paradjanov, come to disturb the peaceful flow. “Ukrainskaya Rapsodiya” thus enter in a powerful melody, the railroads, industrial symbols of the river, cross in several plans, as if to illustrate the opulence of the livings. END_OF_DOCUMENT_TOKEN_TO_BE_REPLACED

Quote:
The overtly propagandistic, anti-religious plot of The Flower on the Stone (Tsvetok na kamne, Dovzhenko Film Studio 1960–1962) does not look like promising Parajanov material: when a new Komsomol mine and mining community is established in the Donbas region, a member of a Pentecostal cult sends his daughter Christina to recruit new believers. Arsen Zagorny, an upstanding Komsomol member and a talented violinist, falls in love with Christina and crosses paths with Zabroda, the leader of the local cell of the cult. Additional problems crop up in the form of Grigori Griva a local boy prone to hooliganism and drink and his buddy Chmykh, a dissolute accordion player. Grigori learns to mend his ways thanks to the guidance of Pavel Fedorovich Varchenko, the wise and patient director of the mine, and Liuda, the Komsomol organizer with whom he falls in love. The film’s title refers to fossilized plants visible on pieces of coal. END_OF_DOCUMENT_TOKEN_TO_BE_REPLACED

A gem from Paradjanov’s early oeuvre is a musical agitation film or a romantic comedy, made by the young director under the guidance of Alexander Dovzhenko and set in the immense fields of the collectivised Ukraine. The social realism is replaced by colourful, convivial and dancing shots of the “Pabieda” (Victory) kolkhoz, where peasant women sing in the fields, and boys march with banners glorifying revolution. Against this backdrop, intense romantic feelings have reached a climactic stage; tailor Sidor Sidorovich, farmer Jushka and soldier Danila Petrovich all dote on the fair-haired Odarka. It is Jushka and Danila who engage in overt hostility; the initial “gentlemen’s” contest turns into an outright confrontation, resulting in miserable Jushka being increasingly more desperate and scorned by the villagers. END_OF_DOCUMENT_TOKEN_TO_BE_REPLACED 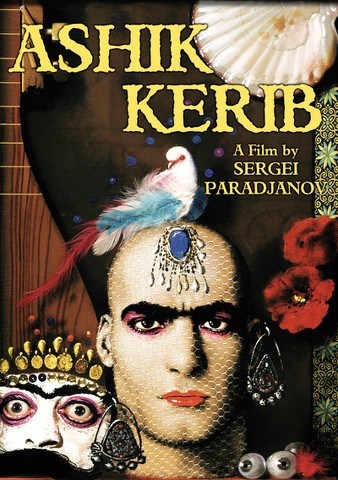 Synopsis: Wandering minstrel Ashik Kerib falls in love with a rich merchant’s daughter, but is spurned by her father and forced to roam the world for a thousand and one nights – but not before he’s got the daughter to promise not to marry till his return. It’s told in typical Paradjanov style overlaid with Armenian folksongs. source END_OF_DOCUMENT_TOKEN_TO_BE_REPLACED 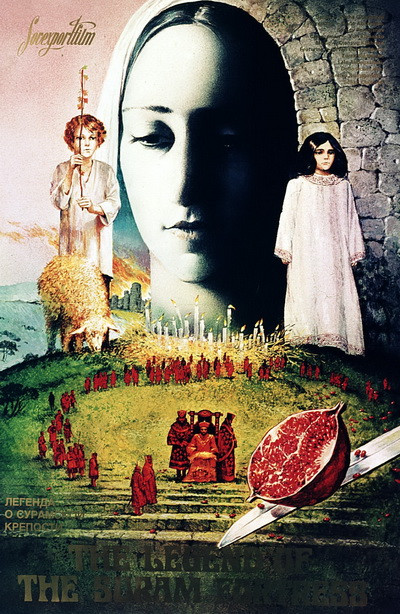 Directors Sergei Paradzhanov and Dodo Abashidze resurrected an old Soviet Georgian folktale as the basis for their film The Legend of Suram Fortress. The fortress in question is forever under construction, and forever collapsing before the last brick can be laid. The advice of a fortuneteller is sought out; the young fellow sent out to seek this advice happens to be the son of a man who years earlier had jilted the fortuneteller. Out of pique, she tells him that he must be walled up in the fortress’ wall, else the structure will continue to tumble. So many ancient legends are based upon self-sacrifice that one would think that Legend of Suram Fortress would have nothing new to offer–and one would be quite unfair to this well-crafted film to think along those lines. Never as brilliant as the critics made it out to be, Suram Fortress is still an immensely satisfying work from a gifted filmmaking team. ~ Hal Erickson, Rovi END_OF_DOCUMENT_TOKEN_TO_BE_REPLACED