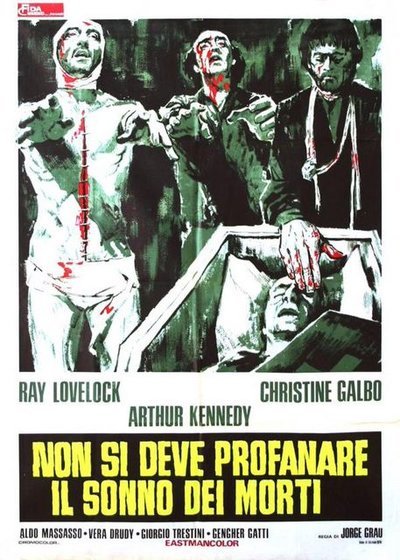 Synopsis:
A cop chases two young people visiting the English countryside, suspecting them of a local murder; unbeknownst to him, the real culprits are the living dead, brought to life with a thirst for human flesh by radiation being used by area farmers as a pesticide alternative. END_OF_DOCUMENT_TOKEN_TO_BE_REPLACED 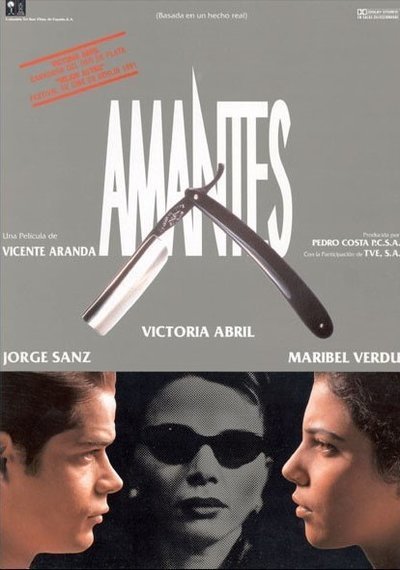 Quote:
Set in ’50s Spain, a young man (Sanz) leaves the army and looks for a job so he and his fiancée (Verdu) can get married. He rents a room from a widow (Abril), and shortly begins a torrid affair with her. The fiancée figures it out and decides to win him back by offering herself to him and taking him to meet her family. Ultimately he has to make a decision. Based on a true story. END_OF_DOCUMENT_TOKEN_TO_BE_REPLACED 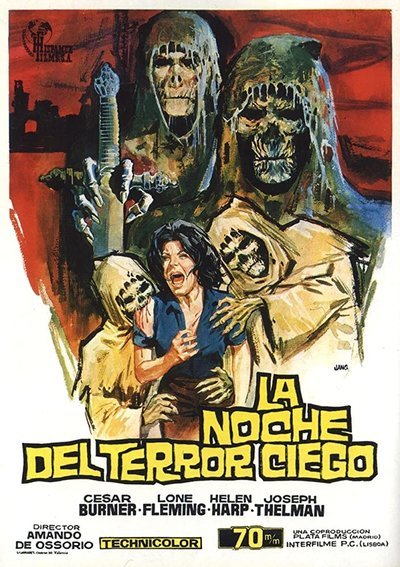 In the 13th century there existed a legion of evil knights known as the Templars, who quested for eternal life by drinking human blood and committing sacrifices. Executed for their unholy deeds, the Templars bodies were left out for the crows to peck out their eyes. Now, in modern day Portugal, a group of people stumble on the Templars abandoned monastery, reviving their rotting corpses to terrorize the land. END_OF_DOCUMENT_TOKEN_TO_BE_REPLACED

Ferreri’s film “Los Chicos” (The Boys) is about the lives of four lower-middle class Spanish boys coping with the effects of the Spanish Civil War. The film depicts an inhospitable urban environment, conflict between male and female adolescents, and an atmosphere of social imperfection. “Los Chicos” recieved negative reviews from parents, politicians and religious groups who believed that the film could have a detrimental impact on adolescents. The censors found the film pessimistic, unhealthy, hostile to the Franco regime and a bad influence to urban youth. “Los Chicos” was never shown commercially, there was only one public viewing in Barcelona in 1963. Ferreri, an Italian working in Spain, had his residency permit cancelled and was forced to leave Spain.
— filmaffinity. END_OF_DOCUMENT_TOKEN_TO_BE_REPLACED 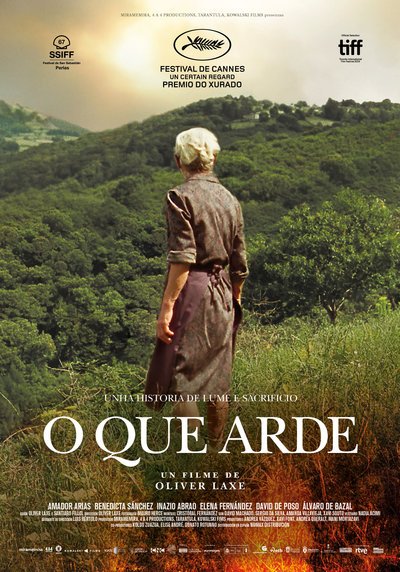 Amador is a notorious Galician arsonist who has been accused of causing a new fire. Lois, a young firefighter, explores the depths of a forest on fire. Their destinies are linked by the power of a mysterious fire. END_OF_DOCUMENT_TOKEN_TO_BE_REPLACED

Quote:
Although it is often described as a documentary, Land Without Bread is actually an early parody — some would say a Surrealist parody — of documentary filmmaking. The film focuses on the Las Hurdes region of Spain, the mountainous area around the town La Alberca, and the intense poverty of its occupants. Buñuel, who made the film after reading an ethnographic study (Las Jurdes: étude de géographie humaine (1927)) by Maurice Legendre, took a Surrealist approach to the notion of the anthropological expedition. The result was a travelogue in which a disinterested narrator provides unverifiable, gratuitous, and wildly exaggerated descriptions of the human misery of Las Hurdes. END_OF_DOCUMENT_TOKEN_TO_BE_REPLACED

Synopsis:
In Medieval France a warlock is be-headed and his wife tortured and executed. Hundreds of years later an isolated group of people discover his head buried on their property. Soon it comes back to life, possessing people and using them to commit sacrifices and to search for the rest of his body. END_OF_DOCUMENT_TOKEN_TO_BE_REPLACED