As some of you are aware, Stanley Kubrick personally re-edited The Shining after the initial US release, shortening it some 20 minutes. The original version, clocked at 144 min is only available in the US (and is available here on worldscinema) but everywhere else, there is this 119 min version, which according to some sources, was Kubrick’s preferred version. END_OF_DOCUMENT_TOKEN_TO_BE_REPLACED

Synopsis:
Prize-fighter Davy Gordon intervenes when private dancer Gloria Price is being attacked by her employer and lover Vincent Raphello. This brings the two together and they get involved with each other, which displeases Raphello. He sends men out to kill Davy, but they instead kill his friend. Gloria is soon kidnapped by Raphello and his men, and it is up to Davy to save her. END_OF_DOCUMENT_TOKEN_TO_BE_REPLACED

Synopsis:
Ex-convict Johnny Clay tells his girl friend, Fay, he has plans for making money, and indeed he has. He rounds up a gang and brings them in on a seemingly fool-proof scheme to rob a race track of $200,000. The first thread unravels when Sherry Peatty, wife of gang-member George Peatty, tells her boyfriend Val Cannon about the plan, and he cuts himself in on that action also. The robbery is completed and the gang goes to the hideout where Johnny will join them later. Val sticks up the robbers, a shot is fired, and all hands are soon dispatched. Johnny, with the money in a suitcase, joins Fay at the airport. And the fat lady still hasn’t sung. END_OF_DOCUMENT_TOKEN_TO_BE_REPLACED

Synopsis:
A ficticious war in an unidentified country provides the setting for this drama. Four soldiers survive the crash-landing of their plane to find themselves in a forest six miles behind enemy lines. The group, led by Lt. Corby, has a plan: They’ll make their way to a nearby river, build a raft, and then, under cover of night, float back to friendly territory. Their plans for getting back safely are sidetracked by a young woman who stumbles across them as they hide in the woods, and by the nearby presence of an enemy general who one member of the group is determined to kill. END_OF_DOCUMENT_TOKEN_TO_BE_REPLACED from amazon.com
The Shining by Stanley Kubrick – that strange story in which a writer and his wife and young son with ESP stay in a mysterious hotel in low season – has been fascinating viewers since its release in 1980.
Simon Roy first saw the film when he was 10 and was mesmerized by a particular line: “How’d you like some ice cream, Doc?” He has since seen the movie at least 42 times, because “it encompasses the tragic symptoms of a deep-seated defect that has haunted [it] for generations.” The painstaking bond he has knitted with this story of evil has enabled him to absorb the disquieting traits of its “macabre lineage” and fully reveal its power over him. This is an unusual and astonishing book. END_OF_DOCUMENT_TOKEN_TO_BE_REPLACED 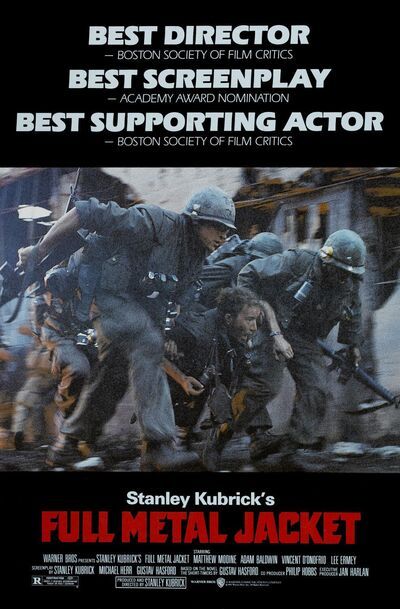 Full Metal Jacket is a 1987 war film directed and produced by Stanley Kubrick. The screenplay by Kubrick, Michael Herr and Gustav Hasford was based on Hasford’s 1979 novel The Short-Timers. The film stars Matthew Modine, Adam Baldwin, Vincent D’Onofrio, R. Lee Ermey, Dorian Harewood, Arliss Howard, Kevyn Major Howard and Ed O’Ross. The story follows a platoon of U.S. Marines through their training and the experiences of two of the platoon’s Marines in the Tet Offensive during the Vietnam War. The film’s title refers to the full metal jacket bullet used by infantry riflemen. The film was released in the United States on June 26, 1987. END_OF_DOCUMENT_TOKEN_TO_BE_REPLACED 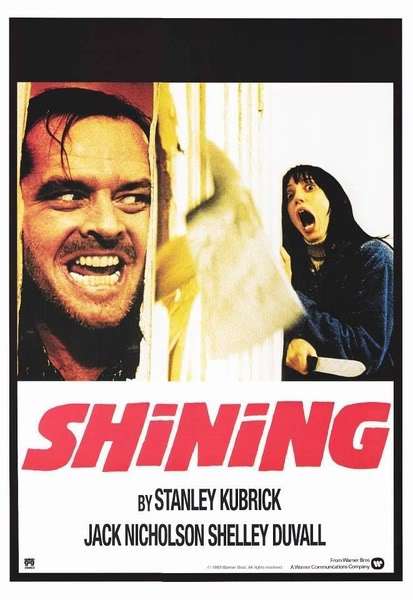 “All work and no play makes Jack a dull boy” – or, rather, a homicidal boy in Stanley Kubrick’s eerie 1980 adaptation of Stephen King’s horror novel. With wife Wendy (Shelley Duvall) and psychic son Danny (Danny Lloyd) in tow, frustrated writer Jack Torrance (Jack Nicholson) takes a job as the winter caretaker at the opulently ominous, mountain-locked Overlook Hotel so that he can write in peace. END_OF_DOCUMENT_TOKEN_TO_BE_REPLACED