Synopsis:
‘Joe Martin, a quiet American, lives a quiet life in the South of France renting boats to tourists. He is happily married to Fabienne and has a twelve-year-old daughter named Michèle. But the quiet man has a past: ten years before, Joe (then Moran) had escaped with four other convicts, among whom the sadistic ex-mercenary Katanga. Seeing the latter brutally kill an M. P., Joe had abandoned his accomplices and left with the car. One night, Captain Ross, Katanga, Whitey and Fausto re-appear…
– Guy Bellinger END_OF_DOCUMENT_TOKEN_TO_BE_REPLACED

Synopsis:
It’s the late nineteenth century Austria. The Emperor Franz-Joseph and his son, the Crown Prince, Archduke Rudolf, have never seen eye to eye. While the Emperor retains the traditions of the empire in the rapidly changing world keeping it a police state, Rudolf is liberal, wanting to see the people have a say in what happens in their lives. Rudolf even rejected the Emperor’s choice of a Spanish wife for him, he instead choosing Belgian Stephanie as his wife, that marriage which he himself never saw and will never see as anything more than a political alliance, Stephanie who he considers a shrew. END_OF_DOCUMENT_TOKEN_TO_BE_REPLACED

Eddie Chapman (Christopher Plummer) is a smooth operator, blowing up safes under the noise of a back firing car outside of the buildings and leaving a calling card before absconding with the pick of the jewels he steals. But whilst in Jersey he is caught and locked up for his crimes on the island which is where he spots the invasion of German soldiers as they marched on to the island. Spotting an opportunity he convinces those in command to let him work as a spy for Germany at which point his execution is faked and he spends time in France being trained by the Germans before being sent to London. But he hands himself in and becomes a double spy working for the British as long as he is pardoned, compensated and receives a wartime commendation for his work. END_OF_DOCUMENT_TOKEN_TO_BE_REPLACED

Quote:
Susy was recently blinded and recently married. Susy’s husband, Sam, is asked to hold a doll for a woman he doesn’t know as they get off an airplane. The woman disappears. Later, she’s found dead by her former associates, Mike and Carlino, small-time hoods, in Susy’s basement apartment. (Both occupants of the apartment are then absent.) The doll woman’s newer partner in crime, Harry Rote, who murdered her for self-dealing, presses Mike and Carlino into a scheme to recover the doll, which contains a fortune in smuggled heroin. END_OF_DOCUMENT_TOKEN_TO_BE_REPLACED

Plot Synopsis by Eleanor Mannikka
With dialogue ranging from flat to offensive and acting in the same range, this low-brow erotic crime drama by director Terence Young stars Jayne Mansfield as Midnight Franklin, a star stripper in a Soho club that is in serious rivalry with another strip joint. A reporter gets involved in the strip scene while writing a story on the clubs, and in the end he has quite a lot to write about. The competition between the two clubs heats up, and after one of the owners is the unknowing instrument in the death of a young (illegally young) stripper, both rival clubs head for a crash. END_OF_DOCUMENT_TOKEN_TO_BE_REPLACED 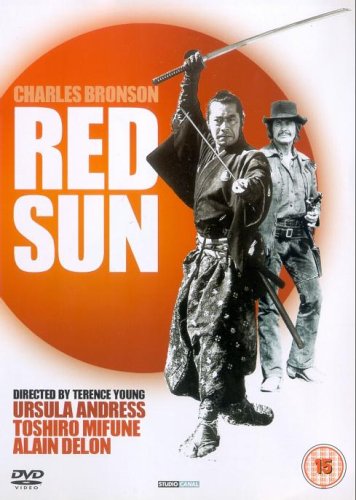 In what was billed as “The First East-Meets-West Western,” Toshiro Mifune plays Kuroda, a samurai warrior who accompanies a Japanese diplomat to the United States. The diplomat has brought with him a golden, jewel-encrusted sword to present as a token of good will to the president, but as they travel by train through the west, they’re ambushed by a pair of outlaws, Gauche (Alain Delon) and Link (Charles Bronson). Gauche and Link steal the sword, but Link leans the hard way about his partner’s trustworthiness when Gauche double-crosses him and makes off with the booty. Since both Kuroda and Link have a grudge against Gauche, they warily join forces to track him down and return the sword to its rightful owner. Along the way, they have to deal with cultural conflict, Indian attacks, and encounters with beautiful women (played by Capucine and Ursula Andress). Given its cast and theme, Red Sun was predictably enough a major box-office success in Europe and Japan, but it passed through with little notice in the United States. END_OF_DOCUMENT_TOKEN_TO_BE_REPLACED 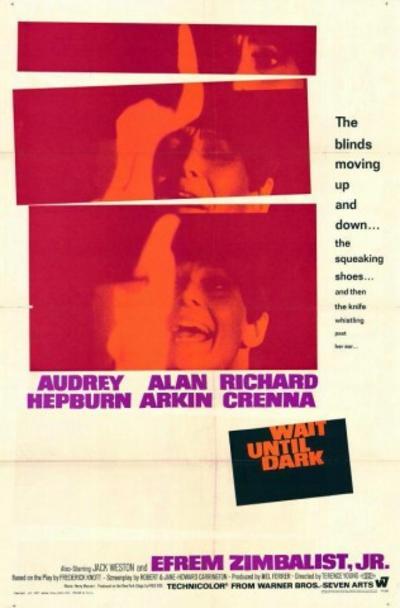 Hepburn was nominated for the Academy Award for Best Actress (losing to Katharine Hepburn), and Zimbalist was nominated for a Golden Globe in the supporting category. The film is ranked #55 on AFI’s 2001 100 Years…100 Thrills list, and its climax is ranked tenth on Bravo’s 100 Scariest Movie Moments. END_OF_DOCUMENT_TOKEN_TO_BE_REPLACED