“In 1962, as a young artist, I came to live and work in Paris. That period until 1969, when I left the city, was not only one of the most formative for me, it was also an era of intellectual, political, and social upheaval in modern history. The film Paris Calligrammes combines my personal memories of the 1960s with a portrait of the city and a social cartography of the age. Like Guillaume Appolinaire’s poetry collection ‘Calligrammes: Poems of Peace and War’, I have given it the form of a filmic “picture-poem” (calligram) in which the words and images, complemented by language, sound, and music, form a mosaic that emerges from the vivacity of those exciting years while speaking to the fragility of all cultural and political achievements.” ––Ulrike Ottinger END_OF_DOCUMENT_TOKEN_TO_BE_REPLACED

From a topographic perspective, Ulrike Ottinger’s cinema is mostly located between Berlin and remote places in the Far East or the Far North. In Paris Calligrammes, she explores the landscape of her memories of the city that she called home for 20 years and that helped shape her beginnings as a painter and filmmaker. Ottinger moved to Paris in her twenties and immersed herself in the cultural scene of the 1950s populated by heroes of the avant-garde and a new generation of artists and intellectuals. END_OF_DOCUMENT_TOKEN_TO_BE_REPLACED 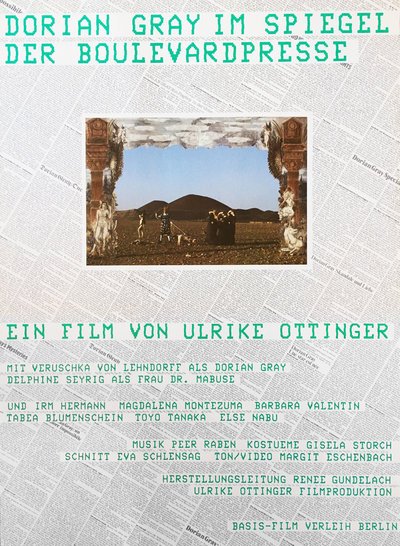 Quote:
From the panoramic, historical revue of the many faces of social prejudice and ostracism, Ottinger turns her attention to the mechanism of exclusion invested with the necessary power to make or break people. Frau Dr. Mabuse, whose illustrious precursor is Fritz Lang’s psychopathic, counterfeiting boss of the underworld, derives her power from the fabrication of reality based on the seduction of images and words. Her perfect object and victim is the Bauhaus-dandy Dorian, whose relation to Oscar Wilde’s prototype is as marginal as his relation to power. The fairy-tale framework of Ottinger’s feature compositions asserts itself strongly in this film as Dorian replaces the evil tycoon and becomes king of the media conglomerate. END_OF_DOCUMENT_TOKEN_TO_BE_REPLACED

Quote:
In Echigo in Japan the snow often lies several feet deep well into May covering landscape and villages. Over the centuries the inhabitants have organized their lives accordingly. In order to record their very distinctive forms of everyday life, their festivals and religious rituals Ulrike Ottinger journeyed to the mythical snow country – accompanied by two Kabuki performers. Taking the parts of the students Takeo and Mako they follow in the footsteps of Bokushi Suzuki who in the mid-19th century wrote his remarkable book “Snow Country Tales”. END_OF_DOCUMENT_TOKEN_TO_BE_REPLACED

The Korean Wedding Chest is a 2009 documentary film about Korean wedding traditions directed by Ulrike Ottinger. The German language film was described as “capturing the collision of ancient tradition and modern culture on the subject of love and marriage in Korea in a film that echoes the beauty, precision and care of the rituals she examines” by the Los Angeles Times. The Washington Post’s website refers to the surrealist style of the film as being well suited to “the regal pacing of the ritual” and calls the film one of Ottinger’s most praised works. END_OF_DOCUMENT_TOKEN_TO_BE_REPLACED

Short Synopsis
…Her son-in-law, Ippolit Matwejewitch Worobjaninow, is a former nobleman and a dandy who is currently wasting away as a small town magistrate in charge of civil marriages. He eagerly takes up the quest to find the treasure. Meanwhile, over the years, the twelve chairs have been dispersed all over the country. However, Worobjaninow is not the only one in pursuit of the treasure. Hot on its trail are Ostap Bender, a clever and colorful conman, as well as Father Fjodor, a priest to whom the wealthy aristocrat has also confessed her secret. Thus begins a wild chase that ranges from North to South, West to East, across water and land, from the country to the city. END_OF_DOCUMENT_TOKEN_TO_BE_REPLACED

Quote:
What constitutes a deadly sin today? Seven of the world’s best-known women directors produce their own version of celluloid sin in this omnibus film. Helke Sander (THE GERMANS AND THEIR MEN) reverses GLUTTONY with her vision of Eve forcing her apples into the hands of a reluctant Adam. Bette Gordon (VARIETY, EMPTY SUITCASES) finds GREED during a fight in the ladies’ room of a luxury hotel over a lottery ticket. Strangers reply to director Maxi Cohen’s ad in a newspaper to share their litanies in ANGER. Award-winning director, Chantal Akerman, battles to overcome her SLOTH in order to complete her film, while Valie Export (INVISIBLE ADVERSARIES) strips bare notions of the skin trade in LUST. END_OF_DOCUMENT_TOKEN_TO_BE_REPLACED