Review
Though many casual film fans are of the opinion that the Russian silent cinema began and ended with Montage and Propaganda, several charming romantic comedies and dramas emanated from the Soviet film industry of the 1920s. The Cigarette Girl of Mosselprom tells the tale of a young man who falls in love with the title character (Yulia Solnsteva). She becomes a famous film star, and herself falls in love–not with the hero, but with her cameraman. No one ever gets what he or she truly wants in the story, though they continue to pursue their lost dreams to the bitter end. Revelling in The Unexpected throughout, Cigarette Girl of Mosselprom is capped by an adroit surprise ending. (Hal Erickson, All Movie Guide)
END_OF_DOCUMENT_TOKEN_TO_BE_REPLACED

Quote:
The feature length version of Andriesh (Kyiv Film Studio 1955) is a straight forward example of the Soviet fairytale film genre. In the film, the young shepherd Andriesh is charged with guarding the village’s flock of sheep. There Andriesh meets Voinovan, a bogatyr (hero) who gives the young boy his magic wooden flute. Black Storm, a wicked sorcerer who despises the flute’s joyous music, descends upon the village in human form, hypnotizes and kidnaps Voinovan’s beloved Liana, sets the village aflame, and steals its flock. Andriesh undertakes a journey to confront Black Storm and meets various individuals who help him, while Voinovan amasses an army of Haiduks (mercenary soldiers) with sun tempered maces to battle the sorcerer. END_OF_DOCUMENT_TOKEN_TO_BE_REPLACED

Orksana, talented student at the Ukrainian Academy likes Antonin whom she met in her youth. Here the love is less tumultuous in retrospect to “Pervyy Paren” (USSR, 1958) of the same Paradjanov, even if a certain formal expression of it remain. In this third feature of the Armenian filmmaker; the Second World war, one of the rare History adaptations of Paradjanov, come to disturb the peaceful flow. “Ukrainskaya Rapsodiya” thus enter in a powerful melody, the railroads, industrial symbols of the river, cross in several plans, as if to illustrate the opulence of the livings. END_OF_DOCUMENT_TOKEN_TO_BE_REPLACED

Quote:
The overtly propagandistic, anti-religious plot of The Flower on the Stone (Tsvetok na kamne, Dovzhenko Film Studio 1960–1962) does not look like promising Parajanov material: when a new Komsomol mine and mining community is established in the Donbas region, a member of a Pentecostal cult sends his daughter Christina to recruit new believers. Arsen Zagorny, an upstanding Komsomol member and a talented violinist, falls in love with Christina and crosses paths with Zabroda, the leader of the local cell of the cult. Additional problems crop up in the form of Grigori Griva a local boy prone to hooliganism and drink and his buddy Chmykh, a dissolute accordion player. Grigori learns to mend his ways thanks to the guidance of Pavel Fedorovich Varchenko, the wise and patient director of the mine, and Liuda, the Komsomol organizer with whom he falls in love. The film’s title refers to fossilized plants visible on pieces of coal. END_OF_DOCUMENT_TOKEN_TO_BE_REPLACED

A gem from Paradjanov’s early oeuvre is a musical agitation film or a romantic comedy, made by the young director under the guidance of Alexander Dovzhenko and set in the immense fields of the collectivised Ukraine. The social realism is replaced by colourful, convivial and dancing shots of the “Pabieda” (Victory) kolkhoz, where peasant women sing in the fields, and boys march with banners glorifying revolution. Against this backdrop, intense romantic feelings have reached a climactic stage; tailor Sidor Sidorovich, farmer Jushka and soldier Danila Petrovich all dote on the fair-haired Odarka. It is Jushka and Danila who engage in overt hostility; the initial “gentlemen’s” contest turns into an outright confrontation, resulting in miserable Jushka being increasingly more desperate and scorned by the villagers. END_OF_DOCUMENT_TOKEN_TO_BE_REPLACED 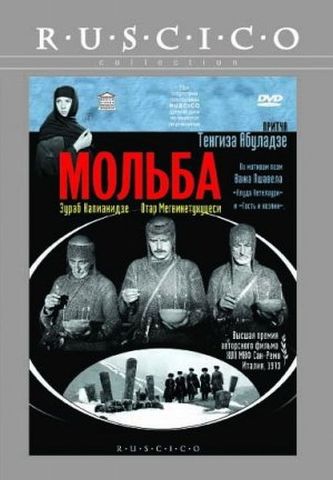 The film is based entirely on the poetry of Vazha Pshavela, and I believe every line of “dialogue” is lifted directly from his poems. From what I can gather, the “story” concerns a soldier who, after feeling guilty about killing an enemy, becomes an outcast from whatever group he belongs to, then has visitations from both God and the devil who give him visions of the future (or perhaps one possible future). A full understanding of the film would seem to require knowledge of all the different groups of people living in the mountains of ancient Georgia, as well as a basic grasp of several various rituals. For instance, I have no idea what the significance of the main character beheading another man’s bull was, nor do I understand why, when said bull-owner calls for the lead to be killed, several other people began extinguishing candles in bowls of sheep’s blood.
END_OF_DOCUMENT_TOKEN_TO_BE_REPLACED 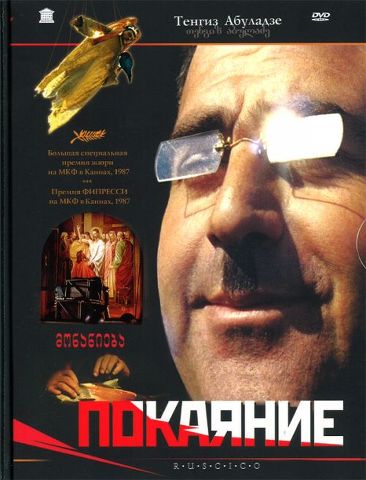 synopsis
Repentance (Pokayaniye) features Avtandil Makharadze in a dual role. As Georgian mayor Varlam Aravidze, Makharadze is a strutting, arbitrarily cruel dictator, something of a composite Stalin and Hitler. Visually he very closely resembles Lavrentiy Beriya, Stalin’s right hander and one-time KGB chief. As Abel, the mayor’s son, Makharadze finds himself in the middle of an ideological squabble when his father dies. Zeinab Botsvadze, a local woman who had suffered mightily under the mayor’s regime, refuses to allow the old man’s corpse to be interred. Despite the son’s Herculean efforts, Botsvadze continues digging up the late mayor’s body, a symbolic gesture to prevent the dead man’s villainy from being forgotten. Repentance was the first Soviet film that openly denounced the horrors of Stalinism, though the Georgian director Tengiz Abuladze (known for his poetic and surrealist films) chose to make it allegorical, deliberately using anachronisms and making the leading character look like a combination of Stalin’s henchman Lavrenti Beriya, Hitler, and Mussolini. An interesting point — the last name chosen for the leading character is totally fictional, there is no such name as Aravidze in Georgia. In fact, “aravi” means “nobody” in Georgian. The filmmakers opted for such a name in order not to offend any real person in the Republic of Georgia. Filmed in 1984, Repentance fell victim to Soviet censorship from the moment it left the editing room. When it was finally released in 1987, the film was deservedly garlanded with several awards, including the Cannes Film Festival Special Jury Prize.
ial turn this film into a searing allegory of the brutal repressions, and heroic sacrifices, of the country’s Stalinist era—–by Hal Erickson END_OF_DOCUMENT_TOKEN_TO_BE_REPLACED