Synopsis:
Udo Kier is a witch hunter apprentice to Herbert Lom. He believes strongly in his mentor and the ways of the church but loses faith when he catches Lom committing a crime. Kier slowly begins to see for himself that the witch trials are nothing but a scam of the church to rob people of their land, money, and other personal belongings of value and seduce beautiful women. END_OF_DOCUMENT_TOKEN_TO_BE_REPLACED 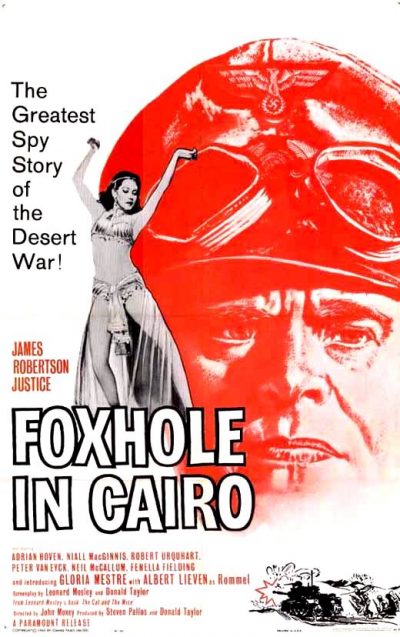 In 1942, Rommel halts his victorious Afrika Korps and sends German agent John Eppler
and radio operator Sandy to Cairo. Their mission is to learn where the British plan to
launch their counteroffensive. Eppler immediately communicates with Amina, an Egyptian
cabaret dancer and his former mistress, who agrees to help him. Unknown to them,
British counterespionage chief Captain Robertson has learned of Eppler’s presence in
Cairo and is working with the leader of Cairo’s Jewish underground, Radek. Amina lures
an ineffectual British officer, Major Wilson, to her houseboat and has him drugged and
robbed of his briefcase containing British counteroffensive details. While Eppler and
Sandy relay the information to Rommel that the battle will take place at Alam Halfa,
Yvette, a member of the Jewish underground, sneaks aboard the boat and revives the
unconscious Wilson. They are interrupted by Amina, who shoots Wilson but is herself
stabbed to death by Yvette. Eppler arrives and is about to kill Yvette when Robertson
and Radek appear and arrest Eppler. Eppler’s satisfaction at having already informed
Rommel that the counteroffensive will take place at Alam Halfa is short-lived. Robertson
had seen to it that the plans in Wilson’s briefcase were false–the real battle will take
place at El Alamein. END_OF_DOCUMENT_TOKEN_TO_BE_REPLACED