Quote:
Still living under the same roof, the Moscow couple of Boris and Zhenya is in the terrible final stages of a bitter divorce. Under those circumstances, as both have already found new partners, the insults pour down like rain in this toxic familial battle zone, always pivoting around the irresolvable and urgent matter of Alyosha’s custody, their 12-year-old only son. Unheard, unloved, and above all, unwanted, the introverted and unhappy boy feels that he is an intolerable burden, however, what his parents don’t know is that he can hear every single word. As a result, when Boris and Zhenya finally realize that Alyosha has been missing for nearly two days, it is already too late. But is this a simple case of a runaway teenager? END_OF_DOCUMENT_TOKEN_TO_BE_REPLACED 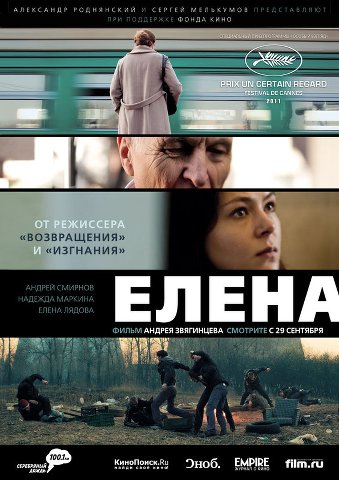 Elena and Vladimir are an older couple, they come from different backgrounds. Vladimir is a wealthy and cold man, Elena comes from a modest milieu and is a docile wife. They have met late in life and each one has children from previous marriages. Elena’s son is unemployed, unable to support his own family and he is constantly asking Elena for money. Vladimir’s daughter is a careless young woman who has a distant relationship with her father. A heart attack puts Vladimir in hospital, where he realizes that his remaining time is limited. A brief but somehow tender reunion with his daughter leads him to make an important decision: she will be the only heiress of his wealth. Back home he announces it to Elena. Her hopes to financially help her son suddenly vanish. The shy and submissive housewife then comes up with a plan to give her son and grandchildren a real chance in life. (Cannes Film Festival) END_OF_DOCUMENT_TOKEN_TO_BE_REPLACED