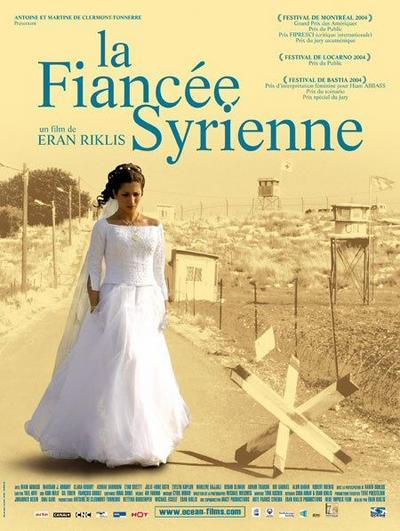 In Majdal Shams, the largest Druze village in Golan Heights on the Israeli-Syrian border, the Druze bride Mona is engaged to get married with Tallel, a television comedian that works in the Revolution Studios in Damascus, Syria. They have never met each other because of the occupation of the area by Israel since 1967; when Mona moves to Syria, she will lose her undefined nationality and will never be allowed to return home. Mona’s father Hammed is a political activist pro-Syria that is on probation by the Israeli government. His older son Hatten married a Russian woman eight years ago and was banished from Majdal Shams by the religious leaders and his father. His brother Marwan is a wolf trader that lives in Italy. His sister Amal has two teenager daughters and has the intention to join the university, but her marriage with Amin is in crisis. When the family gathers for Mona’s wedding, an insane bureaucracy jeopardizes the ceremony. END_OF_DOCUMENT_TOKEN_TO_BE_REPLACED

Quote:
After studying literature at Cairo University, Dunia, 23 years old, wants to become a professional dancer. She attends audition for an oriental dance contest where she recites Arabian poetry without any body movement. She explains to the perplexed jury that a woman can’t move her body or evoke act of love when society ask women to hide their femininity. She is selected and meets Beshir, an intellectual and activist who will supervise her thesis on ecstasy in Sufi love poetry. Their attraction is mutual. This could be liberation for Dunia but the constraints on women in Egyptian society goes deeper than she suspects. END_OF_DOCUMENT_TOKEN_TO_BE_REPLACED

The last film in Youssef Chahine’s autobiographical Alexandria Trilogy stars Chahine himself as his cinematic alter ego, Yehia Mourad, completing his merging of fiction with real life and drama with psychodrama. Opening with Chahine’s triumph at the Berlin Film Festival, where he took home the Silver Bear for Alexandria…Why? (the first film in the trilogy–this is layered stuff), the film explores Yehia’s obsession with his young star, Amir (Amr Abdel-Guelil), while participating in the general strike of 1987. As Yehia fantasizes about the films they would make together (one of them looks like a loony take on Jesus Christ Superstar), he elevates Amir from a kind of adopted son to cinematic messiah. But while caught up in the strike, Yehia becomes enchanted by a former actress, Nadia (Yousra), turned dedicated revolutionary, and he decides to cast her in his next feature. END_OF_DOCUMENT_TOKEN_TO_BE_REPLACED

Quote:
During the Second and Third Crusades, Saladin beat the Franks in battle partly because he was helped by an Arab Christian named Issan. Thus he was able to reconquer Jerusalem and take many prisoners, including Guy de Lusignan, a Christian King.
This big budget production, promoted by Assia, a well-known female producer, enabled Chahine to offer an Arab perspective on the history of the Crusades such as presented by Hollywood and Cinecittà. In order to obtain Egyptian army’s logistical support and also administrative clearances, Chahine cunningly persuaded Nasser, the charismatic ruler of Egypt, that the film was being made as a tribute to him. END_OF_DOCUMENT_TOKEN_TO_BE_REPLACED

We follow four Sudanese filmmakers on their journey through dusty archives and bureaucratic institutions. Their dream: To bring cinema back to Sudan. END_OF_DOCUMENT_TOKEN_TO_BE_REPLACED

Synopsis: This first film by documentary filmmaker Omar Amiralay follows the construction of a dam on the Euphrates river that is supposed to bring tremendous improvement in the lives of villages around it. END_OF_DOCUMENT_TOKEN_TO_BE_REPLACED

Mohamed Malas – Ahlam el Madina AKA Dreams of the City (1984)

“Mother, come and see how beautiful Damascus is!”, little Omar cries out to his mother, a young woman drained by mourning. The widely acclaimed, partially autobiographical, Dreams of the City marks the turn towards auteur Syrian cinema, resurrecting the memories of childhood of the working poor. A young widow and her two sons are forced to move from their native Quneytra to Damascus, where her father forces them to fend for themselves. Against the backdrop of successive military coups that punctuated the turbulent 1950s in Syria, Adib, the eldest of the boys comes of age in the vast and overwhelming urban magic of Damascus. The image of mosques, faces and the greenery of Damascus swirl by as Adib witnesses a dizzying and violent day in the city. At last, the wounded child gazes at the full moon; the city shatters against it. END_OF_DOCUMENT_TOKEN_TO_BE_REPLACED