“In the Presence of a Clown (Swedish: Larmar och gör sig till) is a television film by Ingmar Bergman, recorded for Swedish television in 1997 with Bergman as a director. It was screened in the Un Certain Regard section of the 1998 Cannes Film Festival. It tells the story of a professor named Carl, who has been found guilty of attempted murder and sentenced to treatment in a mental ward. In the hospital he befriends a man named Osvald, and they attempt to make and promote a film.

The film was produced for Sveriges Television from Bergman’s 1994 play of the same title. ” END_OF_DOCUMENT_TOKEN_TO_BE_REPLACED 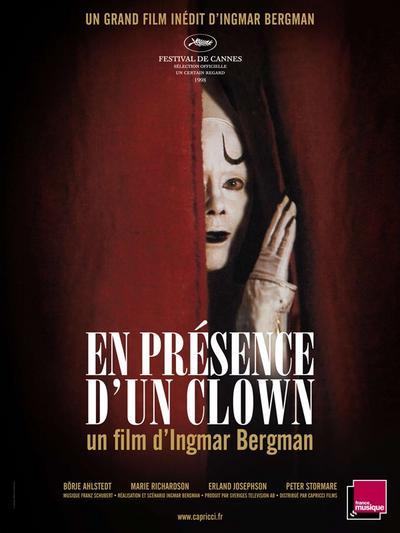 Inventor Carl Åkerblom is a rosy-cheeked 54 year-old admirer of Franz Schubert – and a patient in the psychiatric ward of Akademiska Hospital in Uppsala, after having attempted to beat to death his fiancée, Pauline Thibault. Together with another patient, Professor Osvald Vogler, they set up a film project: the living talkie. Before long, they set off on a frantic tour with their film, “The Joy of the Joyous Girl”… (IMDB) END_OF_DOCUMENT_TOKEN_TO_BE_REPLACED