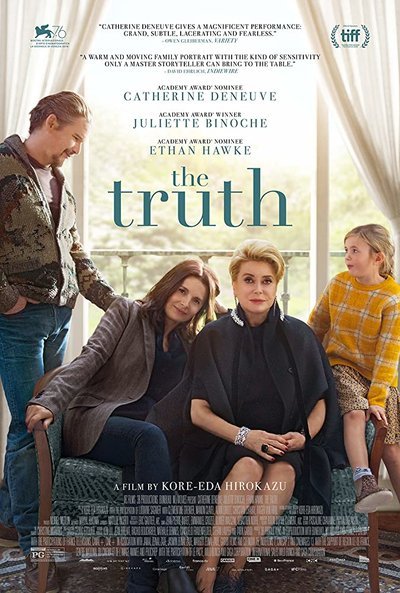 Legends of French cinema Catherine Deneuve and Juliette Binoche join masterful filmmaker Hirokazu Koreeda (Shoplifters, Still Walking) to paint a moving portrait of family dynamics in THE TRUTH. Fabienne (Catherine Deneuve) is an aging French movie star who, despite her momentary lapses in memory, remains a venerable force to be reckoned with. Upon the publication of her memoirs, her daughter Lumir (Juliette Binoche) returns to Paris from New York with her husband (Ethan Hawke) and their young daughter to commemorate its release. A sharp and funny battle of wits ensues between the mother-daughter duo, as Lumir takes issue with Fabienne’s rose-colored version of the past. END_OF_DOCUMENT_TOKEN_TO_BE_REPLACED Quote:
In the 1950s, housewife Louise walked out on her family whilst her children were still young. She gave no indication of where she was going and hasn’t been heard of since. Her daughter, Martine, stayed in the small coastal town where she grew up and became a doctor. Today, Martine’s daughter Audrey is an independent 30-year-old. On the spur of the moment, Audrey decides to visit her parents. During her stay, she comes across an old note book that belonged to her grandmother and which could explain the reason for the latter’s mysterious disappearance… END_OF_DOCUMENT_TOKEN_TO_BE_REPLACED

Synopsis:
It’s the late nineteenth century Austria. The Emperor Franz-Joseph and his son, the Crown Prince, Archduke Rudolf, have never seen eye to eye. While the Emperor retains the traditions of the empire in the rapidly changing world keeping it a police state, Rudolf is liberal, wanting to see the people have a say in what happens in their lives. Rudolf even rejected the Emperor’s choice of a Spanish wife for him, he instead choosing Belgian Stephanie as his wife, that marriage which he himself never saw and will never see as anything more than a political alliance, Stephanie who he considers a shrew. END_OF_DOCUMENT_TOKEN_TO_BE_REPLACED

In the countryside near Normandy’s beaches lives Marie, unhappy. It’s 1944, she’s married to Jérôme, a somewhat fussy milquetoast, diffident to the war around him and unwilling to move his wife to Paris, where she longs to live, shop, and party. A German outfit is bivouacked at Jérôme and Marie’s crumbling château because its commanding officer is pursuing Marie. She’s also eyed by a French spy working with the Allies as they plan D-Day. He woos her (posing to the Germans as her brother) and, in his passion, forgets his mission. Heroics come from an unexpected direction, and Marie makes her choice. END_OF_DOCUMENT_TOKEN_TO_BE_REPLACED

Synopsis
An ambitious project of Chile-born, Paris-based Raul Ruiz, this psychological drama brings to the screen the famous classic of Marcel Proust with fidelity to its interior monologues and streams of consciousness. Proust (Marcello Mazzarella), on his deathbed in his small apartment on Rue Hamelin, is looking through old photos and remembering his life, as real characters intermingle with fictional ones from his novels. The period is 1914-18, when WWI is raging. Hidden in Paris, thanks to his asthma, Marcel Proust wanders into the night. He finds an aging courtesan in Café de la Paix, which is deserted by the curfew. Charlus, the seducer of young boys, is at the Palais des Felicites where he meets his lovers. END_OF_DOCUMENT_TOKEN_TO_BE_REPLACED

Synopsis
One evening, an attractive middle-class woman, France, is pushed out of her car by her irate husband. When her husband drives off, she insists on waiting by the side of the road, certain that he will return once he has cooled off. Whilst waiting, she meets Charles, a man of her own age, who has been struggling for the past two days to repair his car. Although initially frosty towards her, Charles finds himself drawn to France and tries to convince her that her husband has abandoned her for good. France cannot accept this and clings to the faint hope that her husband still loves her… END_OF_DOCUMENT_TOKEN_TO_BE_REPLACED