Quote:
The huge success of Laura may have done more ill than good to Otto Preminger’s career, not only for setting expectations high early in the game, but also for forcing a “noir mystery master” image onto an artist much more interested in asking questions than in answering them. Fallen Angel, the director’s follow-up to his 1944 classic, is often predictably looked down as a lesser genre venture, yet its subtle analysis of shadowy tropes proves both a continuation and a deepening of Preminger’s use of moral ambiguity as a tool of human insight. Linda Darnell, a provocative bombshell caught behind the counter of a small-town California roadside café, is the flame around which the picture’s male moths circle, though the titular fallen angel is later revealed to be tainted drifter Dana Andrews, who comes to town and becomes quickly smitten with her. END_OF_DOCUMENT_TOKEN_TO_BE_REPLACED

This revolutionary masterpiece was, at first, misunderstood as a mere exploitation film. However, the subversive genius shown in its subtext and plot construction was eventually recognized. It now plays quarterly at the Museum of Modern Art in New York City, which has instituted a lecture series on the various intellectual facets of the film. While the series is still in its infancy we have already heard Barak Obama speak on, “Hope and Hot Rods,” and Timothy Michael Cardinal Dolan on, “Christian symbolism and family values in Hot Rods of Hell,” to say nothing of the hilarious speech by Tim Curry, “What exactly is a ‘Hot Rod’.” Those interested in perusing the literature on the subject can contact the Hot Rods of Hell Research Department at Columbia University in NYC. However, you should be prepared to show your research credentials.
@Unkabunk at TIK END_OF_DOCUMENT_TOKEN_TO_BE_REPLACED

A scientist trying to better mankind nearly destroys the world as we know it in this sci-fi thriller. Dr. Stephen Sorensen (Dana Andrews) is doing research in geo-thermal energy; he’s convinced that if men can find a way to drill through the earth’s outer crust into the molten magma near the center, the heat can be harnessed and used to warm dwellings around the world. His assistant, Ted Rampion (Kieron Moore), is skeptical about this idea and believes that there could be dire consequences, but Sorensen boldly moves ahead with his plan, prodded by his secret knowledge that he suffers from a terminal illness and might not live long enough to undergo a longer testing period. However, Rampion’s fears soon prove well founded when Sorensen’s drilling causes a large crack in the earth which begins to rapidly expand, threatening to split the world in two with disastrous consequences. Crack in the World was praised on initial release for its intelligent approach and solid special effects work.
— Mark Deming (AllMovie) END_OF_DOCUMENT_TOKEN_TO_BE_REPLACED

In this drama, a Korean war veteran, a victim of brainwashing while he was a POW, finally goes back to his home in Washington, DC, where he resumes his job at a public relations-opinion research firm. He soon discovers that his company is being run by communists after his partner mysteriously died. Now pro-communist propaganda seems to be their primary business. To stop them, the vet begins cooperating in a full-scale Senate investigation. END_OF_DOCUMENT_TOKEN_TO_BE_REPLACED

In a peaceful Ukrainian village, the school year is just ending in June 1941. Five young friends set out for a walking trip to Kiev, but their travels are brutally interrupted when they are suddenly attacked by German planes, in the first wave of the Nazi assault on the Soviet Union. When the village itself is attacked and occupied, most of the men flee to the hills to form a guerrilla unit. The others resist the Nazis as well as possible, but soon the village is placed under the command of a Nazi doctor who begins using the town’s children as a source of constant blood transfusions for wounded German soldiers. Meanwhile, the small group of young persons tries desperately to take a supply of firearms to the guerrillas. END_OF_DOCUMENT_TOKEN_TO_BE_REPLACED 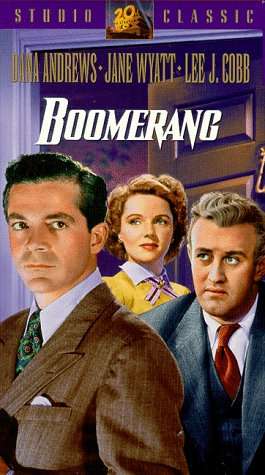 Quote:
Boomerang, directed by Elia Kazan, is a chilling film noir, the true story about the murder of a priest, the subsequent arrest and trial of a jobless drifter, and the efforts of young state’s attorney Henry Harvey (Dana Andrews) to uncover the truth. Closely based on the actual 1924 murder of Fr. Hubert Dahme in Bridgeport, Connecticut, the film was directed by the young Elia Kazan in a highly effective, semi-documentary style. Kazan shot most of the film on location, using high-contrast cinematography and an extremely mobile camera to create a palpable sense of urgency. The screenplay, expertly crafted by Richard Murphy received an Academy Award nomination. END_OF_DOCUMENT_TOKEN_TO_BE_REPLACED