Plot: From the novel by Dumas “La Dames aux Camelias”. In Milan, a prostitute sacrifices herself to prevent the ruin of the young man she loves. END_OF_DOCUMENT_TOKEN_TO_BE_REPLACED

Recently returned to Rome after a long imprisonment of war, doctor Paolo Marchini learns that his wife Patrizia was arrested for murder.
Three years before, not having money to treat her seriously ill child, she had consented to an appointment with a wealthy unknown gentleman, whom she had not met again ever since.
This man had showed up the night before, trying to draw on her again. Quarrel, gunshot…
Patrizia is acquitted at the trial. For the three, life begins anew. END_OF_DOCUMENT_TOKEN_TO_BE_REPLACED

PLOT:
An elderly Marquis, having squandered all his fortune, begins a life as a vagabond philosopher and collects a small group of disciples to whom he teaches his thesis on the futility of work and of money.
Citing Socrates, Plato and Diogenes in his own way, according to his philosophy of life, money is useless and it is a sort of disease that afflicts humanity; moreover men should not work but devote themselves to contemplation and rest. END_OF_DOCUMENT_TOKEN_TO_BE_REPLACED 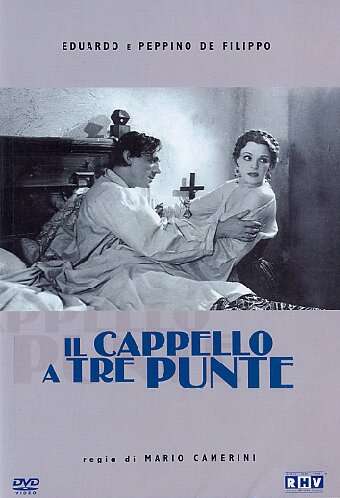 Also known as Three-Cornered Hat, this Italian comedy is based on a Spanish folk tale, which had previously been adapted as a ballet by Manuel de Filla. Director Mario Camerini and his team of screenwriters have refashioned the material as a vehicle for the popular De Filipo brothers, Peppino and Eduardo. The story is a mistaken-identity affair, predicated on the fact that a pompous governor is the exact look-alike of a poor miller. Much of the fun is derived from the efforts to pass off the miller’s homely wife as the governor’s gorgeous spouse. Described by one Mario Camerini devotee as “pretty, noisy and accomplished,” ‘Il Cappell a Tre Punte’ was filmed in 1934, and released in the U.S. two years later. END_OF_DOCUMENT_TOKEN_TO_BE_REPLACED