Synopsis:
The thoughts and dreams of a group of people riding a subway in Paris provides the springboard for Jean-Claude Guiguet’s drama Les Passagers/The Passengers. As the train rolls along, various characters either talk among themselves or address the camera on a variety of subjects. A mathematician (Bruno Putzulu) speaks with one of his students (Stephane Rideau) about the statistical implications of the spread of AIDS. A nurse (Fabienne Babe) meets with a security guard she’s infatuated with (Philippe Garziano), while her friend enjoys a daydream about the joys of life as a rural housewife. A man rants about problems with sex and the virtues of masturbation, while another person debates the relative merits of the films Savage Nights and The Mother and The Whore. Les Passagers/The Passengers was screened as part of the “Un Certain Regard” series at the 1999 Cannes Film Festival.

Synopsis:
With the natural splendour of Lac Léman as a back-drop, Le Mirage is the story of a woman who believes she can recapture her youth by rediscovering love… with no regard for the inescapable realities of life. Maria Tummler, still quite beautiful despite her fifty years, is suddenly possessed with a consuming passion for a young visiting American, a friend of her son. But neither Jeanne, her friend, nor Anna, her daughter and faithful confidante, have a right to know, even though the young girl can see the emotion in her mother’s eyes and is delighted to witness the physical transformation seemingly taking place. Maria is prepared to live this miracle of resuscitated love to its very end, even as some signs of a strange physical weariness begin to invade her new-found sense of well-being. END_OF_DOCUMENT_TOKEN_TO_BE_REPLACED

Plot: Maurice Maïeux lives in a small modest flat near Paris together with his father, Marcel. Marcel used to be a successful heavy-weight boxer 20 years ago, however, would not take part in sham fights. Consequently he was made to disappear from public by hitting him below the belt during one of the fights, him thus being impotent and having to walk on crutches for the rest of his life. His son Maurice is 18 years old, 1.90m tall and weighs 100 Kg. Be it for the sake of taking revenge or for the mere wish that his son should reach more in life that he himself did, Marcel’s heart-felt wish is that Maurice should become a successful boxing champion – and one day even world champion ! Yet, Maurice fights against being patronized by his father. END_OF_DOCUMENT_TOKEN_TO_BE_REPLACED

A French drama around cinema centered around the cinema, love and sexual passion and how it may be translated to film. END_OF_DOCUMENT_TOKEN_TO_BE_REPLACED

Quote:
What young Samuel (Dinis Neto Jorge) was doing at that time of night on the deserted quay, nobody will ever know for sure. In fact, when Mr. Eloi (Henrique Canto e Castro), an old retired sailor, approached him, he was staring at the waters of the Tagus. Tired as he was of his days, Mr. Eloi could not have thought any other way: Samuel was there to put an end to his life. And when Samuel, symbolically or not, invites him to share his last dive, Eloi, as a last resort, stops him from throwing himself in the river and, saying that Heaven can wait, takes him on a tour of the city. So the two characters go off for two long nights of roving during the Saint Anthony festivities. END_OF_DOCUMENT_TOKEN_TO_BE_REPLACED Quote:
Camille, a beautiful fourty-year-old woman, finds a mobile phone that Suzy lost in a station. When Suzy calls her own number, they arrange to meet at Camille’s place so that Suzy can get her phone back. During this encounter, Suzy also meets Clara, Camille’s girlfriend. But they are interrupted by Fabrice, Suzy’s rejected lover, who is drunk and tries to take Suzy back to his place. While Clara takes Suzy to hide in the apartment above theirs, where “Tonton,” a strange old man with a love of yoga, lives, Camille tries to calm down Fabrice. Little by little she consoles him. This is when strange interactions start to occur: Camille becomes passionately involved with Fabrice, while Tonton initiates Suzy into meditation and levitation. Little by little, everyone finds their own path toward happiness, their own place in the game of feelings. END_OF_DOCUMENT_TOKEN_TO_BE_REPLACED 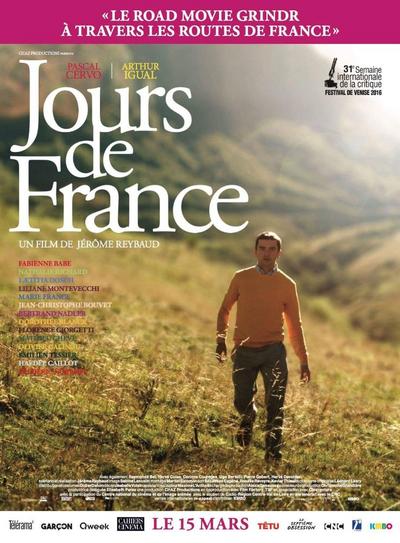 Quote:
Disillusioned with his life in Paris, Pierre Tomas drops everything to travel through France. Via phone numbers written in bathroom stalls, coincidental rendezvous, and Grindr, a smartphone app, Pierre never ceases to find a parking spot for the car he so dearly maneuvers. As he wanders the country for four days and four nights, his lover, Paul, will try to find him, using the same app that compasses Pierre. In a game of absurdist cat and mouse, these two lovers try, in their own ways, to find their way back to one another. END_OF_DOCUMENT_TOKEN_TO_BE_REPLACED