Over a span of five years, a wing of the Kunstahlle Mannheim is torn down and rebuilt. END_OF_DOCUMENT_TOKEN_TO_BE_REPLACED

About the film:
Imagine an airspace into which a bomb has been dropped. The bomb has not reached the site of its detonation, but there is no way to stop its speedy approach. The time between the bomb’s release and its explosion is neither the future (for the ineluctable destruction has not yet happened) nor the past (which is unavoidably about to be extinguished). The flight time of the bomb thus describes absolute nothingness, the zero hour, consisting of all the possibilities that in just a moment will no longer exist. Thus, this story will end before it has begun; here it is told in defiance: an architectural journey from Berlin through Arromanches, Rome, Wrocław, Görlitz, Paris, Bologna, Madrid, Buenos Aires, Atlántida, Montevideo, Mexico City, Brasilia, Tokyo, Saipan, Tinian, Tokyo, San Francisco, Dallas, Binz and Mexico City back to Berlin – into the abyss. END_OF_DOCUMENT_TOKEN_TO_BE_REPLACED

Synopsis:
The film PERRET IN FRANCE AND ALGERIA presents thirty buildings and architectural ensembles of the French architects and construction engineers Auguste and Gustave Perret. Auguste Perret has masterfully refined concrete construction in the implementation of his projects and instilled in them a classical expression. Working in parallel to the execution of numerous construction projects in France, Perret was building under conditions of colonialism in North Africa. The film traces this division chronologically. The buildings erected in Algeria from 1912 until 1952 are for the first time the subject of a film, as are the ones built in France. END_OF_DOCUMENT_TOKEN_TO_BE_REPLACED

The film shows 27 still-existing buildings and interiors by Austrian architect Adolf Loos (1870–1933) in order of their construction. Adolf Loos was one of the pioneers of European Modernist architecture. His vehement turn against ornamentation on buildings triggered a controversy in architectural theory. The development of his “spatial plan” launched a new way of thinking about spaces to be built. His houses, furniture for shops and apartments, facades, and monuments were built between 1899 and 1931. They were filmed in 2006 in Vienna, Lower Austria, Prague, Brno, Pilsen, Nachod, and Paris in their present surroundings. END_OF_DOCUMENT_TOKEN_TO_BE_REPLACED 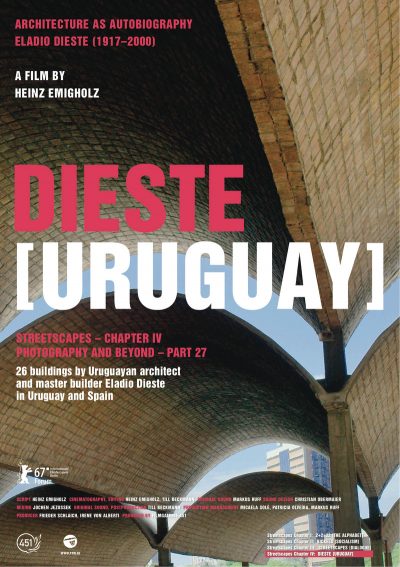 The final part of Heinz Emigholz’s “Streetscapes” series is a triptych. A prologue examines 3 buildings by Julio Vilamajó in Montevideo. The main part of the film is a cinematic documentation of 29 buildings by the Uruguayan architect and shell-construction master Eladio Dieste (1917-2000). END_OF_DOCUMENT_TOKEN_TO_BE_REPLACED 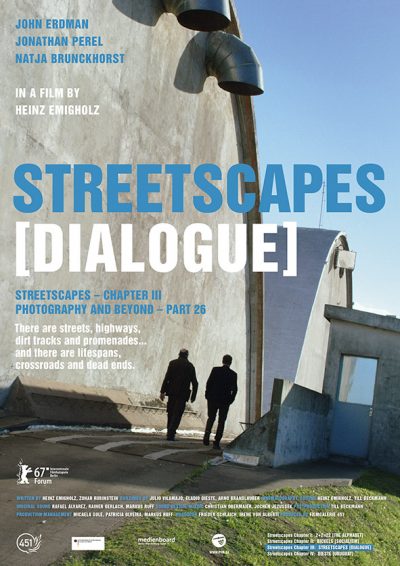 A film director confides in his interlocutor. He talks about the working process, about creative blocks, about artistic crises and expressive forces. At some point, the idea takes hold that this conversation could be turned into a film. And this is the very film we’re watching the two of them in. END_OF_DOCUMENT_TOKEN_TO_BE_REPLACED