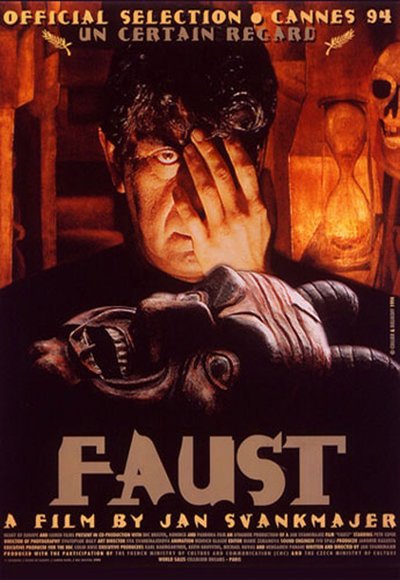 Quote:
…Faust was originally intended as a production for the Laterna magika theatre. Svankmajer describes it as a “variety collage” in which elements from Marlowe, Goethe, Christian Dietrich Grabbe, Gounod and the Czech folk puppet play (Kopecky) are all framed by the reality of contemporary Prague… The films hero, an ordinary man in a dirty raincoat, lives in a rundown flat in Prague. Here (as in Conspirators of Pleasure), it is noticeable that Svankmajer avoids any exotic images of “tourist Prague”, preferring nondescript streets and down-at-heel cafes serving nauseous food… Like Alice Faust moves from scene to scene and from one world to another but, this time, also from text to text, with a time out for the occasional cigarette or glass of beer. END_OF_DOCUMENT_TOKEN_TO_BE_REPLACED

Frank visits his friend Josef, who introduces him to his pedigree rabbits and his wife Mary. Frank is more interested in the slightly unsettling fact that Josef and Mary’s garden fence is entirely made up of living people holding hands. Finally, Frank asks Josef how he manages to keep the fence together… END_OF_DOCUMENT_TOKEN_TO_BE_REPLACED

A man, apparently on the run, takes shelter in a dilapidated house. Every day, he drills a hole through a wall and looks into one of the rooms, each time seeing a different surreal vision… END_OF_DOCUMENT_TOKEN_TO_BE_REPLACED

A non-narrative voyage round Sedlec Ossuary, which has been constructed from over 50,000 human skeletons (victims of the Black Death). END_OF_DOCUMENT_TOKEN_TO_BE_REPLACED 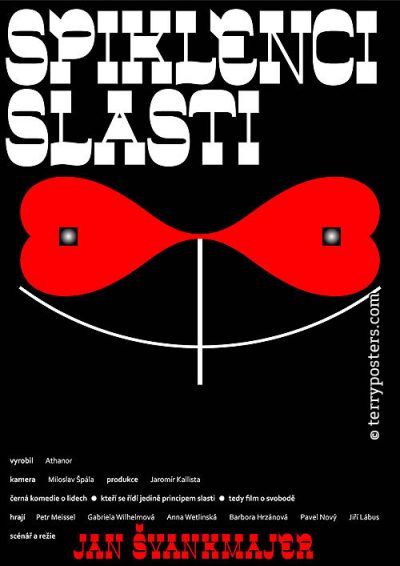 Quote:
Any film that cites Sigmund Freud, Max Ernst, Luis Bunuel, and the Marquis de Sade as cardinal influences clearly is not standard mall movie fare. In Conspirators of Pleasure, Jan Svankmajer has created a film that is thoroughly surreal in the truest sense of the term. Like Un Chien Andalou, this film brilliantly takes a basic human instinct — sexuality — and renders it not only very strange but also very funny. Scenes of a newswoman responding sexually to toe-sucking carp or of a policeman luxuriating in a tactile smorgasbord of nails, rubber, and fur are not easily forgotten. Yet this film is not simply an exploration in Freudian repression and sublimation; Svankmajer’s characters regard each other with knowing glances, as if recognizing the others as members of some bizarre cabal. Set in a former Eastern Bloc nation with repressive laws and prudish views on sex, their activities are given a political charge, lending their obsessions an additional subversive weight. Though definitely not a film for everyone, Conspirators of Pleasure is a masterful romp through the human subconscious and a brilliant satire on human nature. END_OF_DOCUMENT_TOKEN_TO_BE_REPLACED