Synopsis:
Ray Milland plays Stephen Neale–a bewildered man just released from an asylum. However, reality proves to be more surreal and perplexing than the asylum itself. Neale wanders through the streets, whimsically stopping off at a rural carnival, where he unwittingly gets involved in a complex and dangerous spy ring that is attempting to smuggle microfilm out of the country. He travels to London and hires a small-time detective to help him decipher the mysterious things that seem to constantly befall him. But things only get more confused from there, leading Stephen to Scotland Yard, where his fate entwines with a Nazi front organization, and a love affair. END_OF_DOCUMENT_TOKEN_TO_BE_REPLACED

Synopsis:
Lovely Linda Mason has crooner Jim Hardy head over heels, but suave stepper Ted Hanover wants her for his new dance partner after femme fatale Lila Dixon gives him the brush. Jim’s supper club, Holiday Inn, is the setting for the chase by Hanover and manager Danny Reed. The music’s the thing. END_OF_DOCUMENT_TOKEN_TO_BE_REPLACED 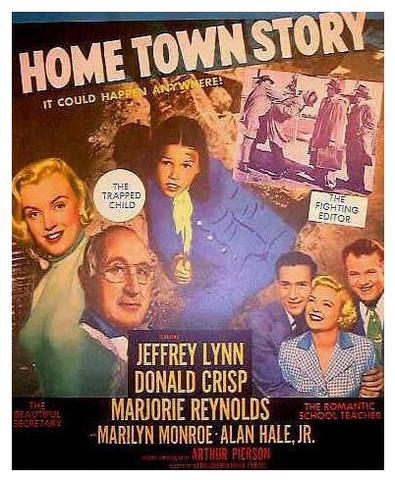 AMG: Home Town Story was commissioned as a pro-Big Business tract by General Motors. The story revolves around Blake Washburn, a mildly leftist newspaperman, played by Jeffrey Lynn. Returning to his home town, Washburn turns his journalistic vitriol upon the local business interests. Only after his kid sister Katie (Melinda Plowman), trapped in a cave-in, is rescued by locally produced technology, does Washburn realize the value of the capitalistic system. Home Town Story was fitfully distributed by MGM, then lapsed into obscurity. It might have remained there had it not been for the presence of a young Marilyn Monroe in a supporting part. END_OF_DOCUMENT_TOKEN_TO_BE_REPLACED