Based on Ivan Turgeyev’s novella, Erste Liebe is about two young lovers in czarist Russia. One is a 21-year-old woman, the other a young man of sixteen. Things take a tragic turn as the girl (Dominique Sanda as Sanaida) falls in love with the boy’s father (Maximilian Schell). This film was nominated for Best Foreign Language Film in 1970’s Academy Awards. Written
by Reece Lloyd END_OF_DOCUMENT_TOKEN_TO_BE_REPLACED

The Day That Shook the World (Serbo-Croatian: Sarajevski atentat, lit. The Sarajevo Assassination) is a 1975 Czechoslovak-Yugoslav-German co-production film directed by Veljko Bulajić, starring Christopher Plummer and Florinda Bolkan. The film is about the assassination of Archduke Franz Ferdinand and his wife Sophie in Sarajevo in 1914 and the immediate aftermath that led to the outbreak of World War I. END_OF_DOCUMENT_TOKEN_TO_BE_REPLACED

Synopsis:
While investigating a high-profile murder case, a savvy but unorthodox veteran police inspector has to cope with a bad conscience, bad health, an overzealous partner, a timid superior and interference from political interests. This is an existential whodunit, but a good one, and like any good whodunit, ends with a very surprising conclusion, which will be spoiled for you if you read much of anything at all about the movie. END_OF_DOCUMENT_TOKEN_TO_BE_REPLACED

Plot Synopsis by Mark Deming
A distinguished cast highlights this film adaptation of a stage drama by Peter Shaffer. Stanley Harrington (Jack Hawkins) is a self-made businessman incapable of expressing his emotions or compromising with others; his wife Louise (Rosalind Russell) imagines herself an intellectual, though her intelligence is more of an affectation than a reality. Stanley and Louise hire Walter (Maximilian Schell), a teacher from Germany, as a tutor for their two teenage children, effeminate Philip (Richard Beymer) and high-strung Pamela (Annette Gorman). Walter tries to ingratiate himself with the family, with little success; when he tries to get to know Louise better, she imagines that he’s fallen in love with her, and she’s deeply hurt when he confesses that he instead sees her as a motherly figure. Walter is eventually driven to the brink of suicide, which forces the family to reconsider their attitudes toward Walter and each other. END_OF_DOCUMENT_TOKEN_TO_BE_REPLACED 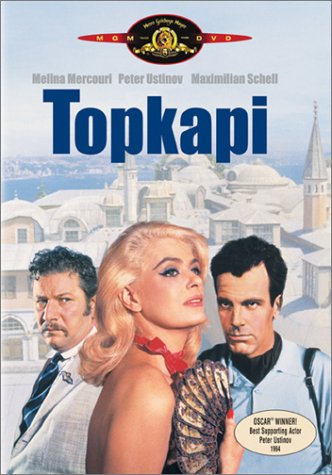 David Cornelius wrote:
“Nine years after helping define the heist movie with the 1955 masterpiece “Rififi,” director Jules Dassin took another go at the genre, this time with a comedy. “Topkapi” is a lighter, breezier affair than Dassin’s earlier picture, but it’s in no way weaker or less memorable. In fact, it’s this movie that served as the inspiration for the classic TV series “Mission: Impossible,” and yes, it’s this film’s most memorable sequence that was, um, “borrowed” for the most memorable sequence of the 1996 “Impossible” movie. END_OF_DOCUMENT_TOKEN_TO_BE_REPLACED