PLOT
Lane (Mia Farrow), who is recovering from a suicide attempt in her house in the country during the tail end of summer. Local widower Howard (Denholm Elliott) has befriended her. Her friend Stephanie (Dianne Wiest) is spending the month with her, and her mother, Diane (Elaine Stritch), and stepfather (Jack Warden) come to visit. It is a story of unrequited love, betrayal, selfishness, and loneliness. END_OF_DOCUMENT_TOKEN_TO_BE_REPLACED

Quote:
Beautifully dark movie which grants Mia Farrow the freedom to showcase the strange range of her gift. Elizabeth Taylor stays close with a deep and sensitive touch, flashing a legitimate side of herself, oft covered up. Robert Mitchum achieves repulsive perfection lurking in the garden, symbolic of the disgust and fear we share in our hide. The entire cast in breath and stone include every sense in totality, placing the actors and ourselves together to spy on each other from above, and within the ornamental mansion. Intense hallucinogenic 1968 camera shots intimately portray the family by chance’s horrific existence. END_OF_DOCUMENT_TOKEN_TO_BE_REPLACED

In West Berlin at the height of the Cold War, British spy Eberlin (Laurence Harvey) is tasked with the dangerous assignment of finding and assassinating the treacherous KGB agent Krasnevin, who has killed many undercover British agents. He’s given a new partner, Gatiss (Tom Courtenay), to help eliminate the deadly Russian. What neither his bosses nor his partner know, however, is that Eberlin himself is Krasnevin, a double agent whose secret identity his Moscow bosses don’t want compromised. END_OF_DOCUMENT_TOKEN_TO_BE_REPLACED

Richard Loncraine – Full Circle AKA The Haunting of Julia (1977)

Review Summary
The British/Canadian Full Circle is better known by its American title, The Haunting of Julia. The eponymous Julia, played by Mia Farrow, is driven to near-madness by the death of her daughter. Things don’t get much better when Julia and her husband move into a forbidding old mansion. The events leading up to her daughter’s horrible death threaten to repeat themselves, thereby explaining the film’s original title. Based on a Peter Straub story, Full Circle covers familiar ground, but fans of Gothic horror will be generously served. ~ Hal Erickson, All Movie Guide END_OF_DOCUMENT_TOKEN_TO_BE_REPLACED

Psychological terrorism and supernatural horror have rarely been dramatized as effectively as in this classic 1968 thriller, masterfully adapted and directed by Roman Polanski from the chilling novel by Ira Levin. Rosemary (Mia Farrow) is a young, trusting housewife in New York whose actor husband (John Cassavetes), unbeknownst to her, has literally made a deal with the devil. In the thrall of a witches’ coven headquartered in their apartment building, the young husband arranges to have his wife impregnated by Satan in exchange for success in a Broadway play. To Rosemary, the pregnancy seems like a normal and happy one–that is, until she grows increasingly suspicious of her neighbors’ evil influence. Polanski establishes this seemingly benevolent situation and then introduces each fiendish little detail with such unsettling subtlety that the film escalates to a palpable level of dread and paranoia. By the time Rosemary discovers that her infant son “has his father’s eyes” … well, let’s just say the urge to scream along with her is unbearably intense! One of the few modern horror films that can claim to be genuinely terrifying, Rosemary’s Baby is an unforgettable movie experience, guaranteed to send chills up your spine. END_OF_DOCUMENT_TOKEN_TO_BE_REPLACED 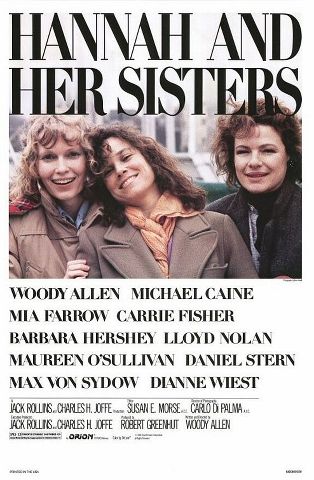 Synopsis:
The eldest daughter of show-biz parents, Hannah (Mia Farrow) is a devoted wife, loving mother and successful actress. A loyal supporter of her two aimless sisters Lee (Barbara Hershey) and Holly (Dianne Wiest), she’s also the emotional backbone of a family that seems to resent her stability almost as much as they depend on it. But when Hannah’s perfect world is quietly sabotaged by sibling rivalry, she finally begins to see that she’s as lost as everyone else, and in order to find herself, she’ll have to choose — between the independence her family can’t live with…and the family she can’t live without. END_OF_DOCUMENT_TOKEN_TO_BE_REPLACED

Woody Allen brings a diverting whimsy and a hopeful innocence to this period roundelay, based upon Ingmar Bergman’s Smiles of a Summer’s Night and Jean Renoir’s Rules of the Game. Allen plays Andrew, a Wall Street broker and eccentric inventor who is having frigidity problems with his wife Adrian (Mary Steenburgen). Adrian and Andrew are the hosts, at their summer house in the country, of a wedding party for Ariel (Mia Farrow) and Leopold (Jose Ferrer), a famed academic who is Andrew’s cousin. Over the weekend, another couple converges at Andrew’s summer home — the sly, lady-killer of a doctor Maxwell (Tony Roberts) and his date, the deliciously ditzy nurse Dulcy (Julie Hagerty). Through the course of the weekend, sexual partners are exchanged and magical fairy tale moments are shared. END_OF_DOCUMENT_TOKEN_TO_BE_REPLACED