Mackenzie Bovard takes his job working for the federal government very seriously, and when he goes out to get the riff-raff that defy the laws of the land, he finds them and hangs them. This one-two punch does not sit well with a local community when he comes into their midst to pick up Johnny Bishop, Johnny has turned himself around and is not only supported by his friends and neighbours, but also by the sheriff. END_OF_DOCUMENT_TOKEN_TO_BE_REPLACED

Synopsis
Based on a popular novel by Samuel Hopkins Adams, this screwball comedy stars Errol Flynn in the title-role, the heir to an industrial fortune kept hidden from the world by his imperious grandmother (May Robson). Intrigued by the secrecy, peppy Joan Blondell literally crashes the estate to liberate the young man and the two embark on a whirlwind trip through Pennsylvania. Falling in love with the intruder along the way, Flynn learns how life is lived by the other half — or at least by the wacky Warner Bros. stock company — and proves himself to be much more capable than “Grandma” Robson ever imagined. ~ Hans J. Wollstein, All Movie Guide END_OF_DOCUMENT_TOKEN_TO_BE_REPLACED

Synopsis:
Humphrey van Weyden, a writer, and fugitives Ruth Webster and George Leach have been given refuge aboard the sealer “Ghost,” captained by the cruel Wolf Larsen. The crew mutinies against Larsen’s many crimes, and though van Weyden, Ruth, and George try to escape Larsen’s clutches, they find themselves drawn inexorably back to him as the “Ghost” sails toward disaster. END_OF_DOCUMENT_TOKEN_TO_BE_REPLACED

Probably the most notorious of the handful of pro-Soviet films produced by various Hollywood studios in 1943–44, going out of its way to defend the Soviet Union in every imaginable way: justifying the show trials of 1937, claiming that Finland acted as an aggressor in the Winter War of 1939, etc. Worth seeing for its historical importance, but not without some entertainment value, too, mainly thanks to Michael Curtiz’s direction and Walter Huston’s manic performance as the former Soviet ambassador Joseph E. Davies. END_OF_DOCUMENT_TOKEN_TO_BE_REPLACED

SPOILERS!! The film starts with a woman on the run from her millionaire husband giving birth to a daughter in the home of a washerwoman. The woman dies in childbirth, but the baby survives. The washerwoman leaves the baby in a horsedrawn Parisian taxicab (No. 13). The paperwork of the birth is lost in a huge tome. Sixteen years pass. The tome is bought by a poor student. One day his bookshelf collapses, and the tome opens at the page where the paperwork has been hidden. The student realises that the paperwork relates to a millionaire who has spent the last sixteen years looking for his pregnant wife. END_OF_DOCUMENT_TOKEN_TO_BE_REPLACED 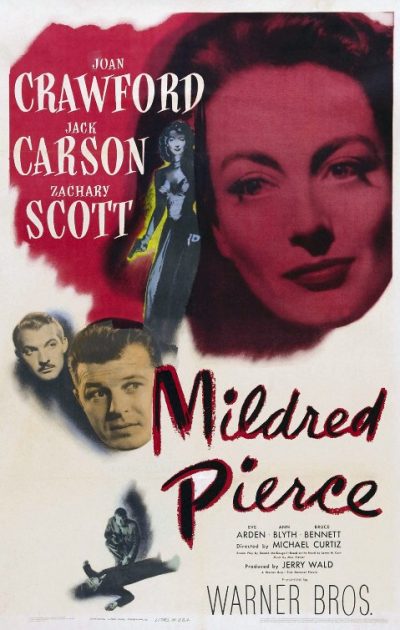 Quote:
Mildred Pierce (1945) is a classic, post-war film noir mixed with typical soap-operish elements of the woman’s melodramatic picture or “weeper,” including a strand of a typical murder mystery often told by flashback. The family melodrama was significantly modified from its original source due to pressures of the Production Code regarding its sordidness – namely, the incestual behavior of the dissolute playboy character named Monte. END_OF_DOCUMENT_TOKEN_TO_BE_REPLACED Pauline ‘Paulie’ Nevins is cheating on her husband Ralph Nevins, a land developer, with his sales manager E.V. ‘Marsh’ Marshall. When Paulie and Marsh meet up for a secret rendez-vous in a lovers’ lane they manage to overhear three criminals planning a jewelry heist. They hatch a plan to rob the thieves and run away together but Ralph starts to get suspicious of them. END_OF_DOCUMENT_TOKEN_TO_BE_REPLACED