Quote:
The story centers on a group of young people who travel back in time when they are in a movie theater just before closing time. They witness deaths during the closing days of Japan’s feudal times and on the battlefront in China before they are sent to Hiroshima just before the Aug. 6, 1945, atomic bombing of the city. END_OF_DOCUMENT_TOKEN_TO_BE_REPLACED

It is 1965. High-school student Takeyoshi Fujiwara Yasufumi Hayashi) hears “Pipeline” by the Ventures, and is mesmerized by their unique sound. With three friends, he forms a band called “The Rocking Horsemen.” A warm and comic glimpse into high-school and small-town life in Japan in the 60’s. END_OF_DOCUMENT_TOKEN_TO_BE_REPLACED

Quote:
Kyoko met Tetsu during her trip to San Francisco. Soon they fell in love but getting married was not in his mind. They were to meet again back in Tokyo but Tetsu didn’t turn up. END_OF_DOCUMENT_TOKEN_TO_BE_REPLACED

Harada is a successful scenario writer, and his best buddy has just announced an intention to propose to Harada’s ex-wife. Recovering from the shock, Harada indulges in melancholy, mainly on his failure as a husband and father, and goes to a ‘Rakugo’ (sit-down comedy) show, where a friendly man in the audience invites him home. Harada is puzzled at the strong resemblance of this man and his wife to his own parents, who were killed nearly 30 years ago when he was twelve. He visits the couple repeatedly, and greatly enjoys the happy atmosphere there, which was much like his childhood, and such a contrast to his current existence, which is lonely and tortured. But he is no longer alone. END_OF_DOCUMENT_TOKEN_TO_BE_REPLACED 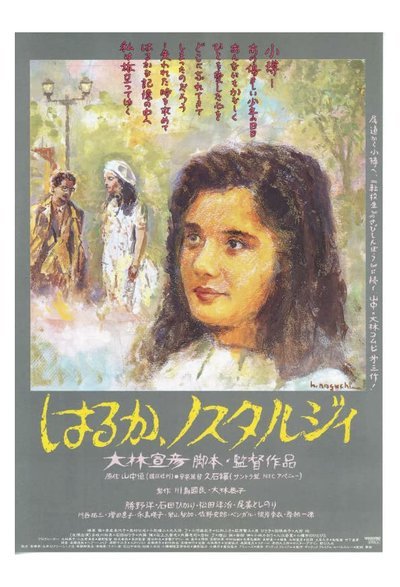 A fantasy drama about a popular writer who returns to Otaru, his hometown and finds a girl who looks a lot like the woman he once loved. END_OF_DOCUMENT_TOKEN_TO_BE_REPLACED

Lonely and love-struck, high-school student Hiroki pursues one girl but another one mysteriously appears in his life. Is she a figment of his lonely psyche, or real? An intricate triangle develops, and the viewer can’t quite be sure what is happening until the whole story is neatly resolved at the end. END_OF_DOCUMENT_TOKEN_TO_BE_REPLACED