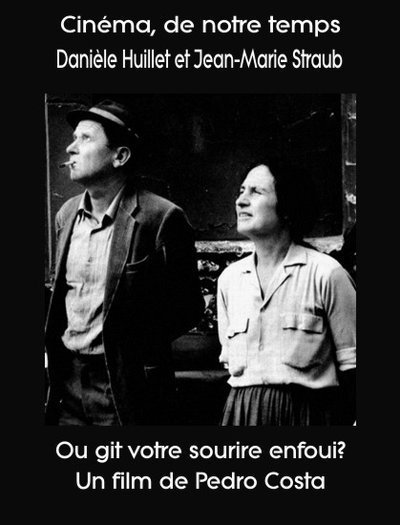 Documentary about Danièle Huillet and Jean-Marie Straub. While Danièle Huillet and Jean-Marie Straub assemble the third version of “Sicilia!”, Pedro Costa films a “reassembly comedy.” Behind their patience at work, tender and violent, the two filmmakers reveal a certain idea of the cinema, their cinema and their married life. Pedro Costa takes us to the center of his own cinema, in a unique space-time trip, and offers cinephiles the most beautiful gift he can dream of: participating in the interior, in the act of cinematic creation.
END_OF_DOCUMENT_TOKEN_TO_BE_REPLACED

In 6 Bagatelles (6 Bagatelas), Pedro Costa takes unused scenes from his 2001 documentary on Staub and Huillet, Where Does Your Hidden Smile Lie? (Oû gît votre sourire enfoui?) and edits them into a new context. END_OF_DOCUMENT_TOKEN_TO_BE_REPLACED

Quote:
The first film in Pedro Costa’s transformative trilogy about Fontainhas, an impoverished quarter of Lisbon, Ossos is a tale of young lives torn apart by desperation. After a suicidal teenage girl gives birth, she misguidedly entrusts her baby’s safety to the troubled, deadbeat father, whose violent actions take the viewer on a tour of the foreboding, crumbling shantytown in which they live. With its reserved, shadowy cinematography by Emmanuel Machuel (who collaborated with Bresson on L’argent), Ossos is a haunting look at a devastated community. END_OF_DOCUMENT_TOKEN_TO_BE_REPLACED

Quote:
For the extraordinarily beautiful second film in his Fontainhas trilogy, Pedro Costa jettisoned his earlier films’ larger crews to burrow even deeper into the Lisbon ghetto and the lives of its desperate inhabitants. With the intimate feel of a documentary and the texture of a Vermeer painting, In Vanda’s Room takes an unflinching, fragmentary look at a handful of self-destructive, marginalized people, but is centered around the heroin-addicted Vanda Duarte. Costa presents the daily routines of Vanda and her neighbors with disarming matter-of-factness, and through his camera, individuals whom many would deem disposable become vivid and vital. This was Costa’s first use of digital video, and the evocative images he created remain some of the medium’s most astonishing.—The Criterion Collection END_OF_DOCUMENT_TOKEN_TO_BE_REPLACED

Synopsis
O Nosso Homem (Our Man) is a short variation in the line of the trilogy Pedro Costa has devoted to the habitants of the Fontainhas quarter, which has been destroyed in the meantime. It can be considered as a sort of appendix to the third part, Juventude en Marcha (Colossal Youth), in which the hero, Ventura, reappears as one of the four characters of this dialogue of hopelessness. They go their own way, from one setting to another, from the darkest to the brightest, carried by this lavishness of frames and timbres of light that once made Jacques Rancière (writing about Juventude en Marcha) say that “the faith in the art which attests to the greatness of the poor – the greatness of each and every man – shines here more than ever. But it does not assimilate it anymore to an affirmation of a greeting END_OF_DOCUMENT_TOKEN_TO_BE_REPLACED