Quote:
A newspaper obit writer, impatient to move ahead at his job, wishes he could know the news before it happens. One night, Old Pop Benson grants him that power, in the form of the next day’s newspaper. At first it only gets him in trouble, but also brings him closer to the pretty girl in a fortune-telling routine. By the third tomorrow’s paper, he’s sure he’s got this whole future business in the bag — reporting advance scoops, picking sure winners at the race track — when he reads a very final headline: the news of his own death. END_OF_DOCUMENT_TOKEN_TO_BE_REPLACED

Synopsis:
Seven guests, a newly hired personal secretary and two staff are gathered for a weekend on an isolated island by the hosts the Owens who are delayed. At dinner a record is played and the host’s message alleges that all the people present are guilty of murder and suddenly the first of them is dead, then the next – It seems that one of them is the murderer but the leading person is always the person who is murdered next and at last only two people are left. END_OF_DOCUMENT_TOKEN_TO_BE_REPLACED

Having lost a battle against the Prince of Beaulieu, Marechal d’Allenberg returns to his castle with his few remaining followers. As famine takes its toll, one of d’Allenberg’s men, Joli Coeur, sets off to look for food. The latter not only finds some pork, but he also saves the honour of a beautiful girl who was being attacked by some lustful brutes. On his return to the castle, Joli Coeur is surprised to see both the man who gave him the pork and the girl he rescued. The girl turns out to be d’Allenberg’s daughter, Hélène. Knowing that Joli Coeur would do everything for her, Hélène asks him to leave for a secret and dangerous mission. He must go back behind the enemy lines to look for Frédéric, the Prince of Beaulieu’s son, and ask him to stop the war… END_OF_DOCUMENT_TOKEN_TO_BE_REPLACED

“Criterion” wrote:
In René Clair’s irrepressibly romantic portrait of the crowded tenements of Paris, a street singer and a gangster vie for the love of a beautiful young woman. This witty exploration of love and human foibles, told primarily through song, captures the flamboyant atmosphere of the city with sophisticated visuals and groundbreaking use of the new technology of movie sound. An international sensation upon its release, Under the Roofs of Paris is an exhilarating celebration of filmmaking and one of France’s most beloved cinematic exports. END_OF_DOCUMENT_TOKEN_TO_BE_REPLACED

Quote:
René Clair, the most distinguished of the French motion-picture directors, is one of the great men of the cinema. His triumphant photoplays, Sous les toits de Paris, Le Million and, the finest of them all, A nous la liberté, stand among the genuine classics of the films. Now M. Clair, who has tried cheerful sentiment in Sous les toits, farce in Le Million, and brilliant social satire in A nous la liberté, gives up some of his adventurousness and returns to the quiet romantic mood of his earliest success in the new work called Quatorze juillet (“Fourteenth of July”). END_OF_DOCUMENT_TOKEN_TO_BE_REPLACED 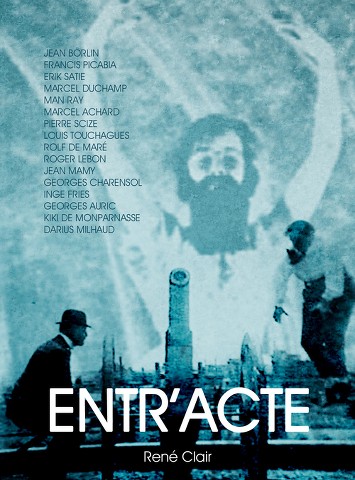 Experimental and avant-garde offering from director René Clair that was produced by the French dance company Les Ballets Suis, and features the members mourning the loss of their star dancer, Borlin. Outrageously surreal and silly, it offers such sights as a funeral procession with the hearse being pulled by a camel and the dead occupant giving a final performance. Eric Satie (who is uncredited) composed the music and makes an appearance towards the end. END_OF_DOCUMENT_TOKEN_TO_BE_REPLACED 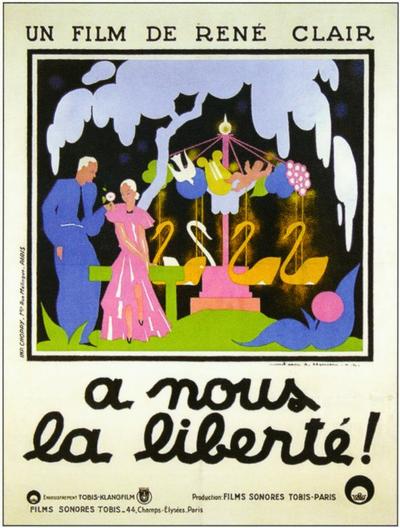 Perhaps the most elegantly rendered feature film of the very early days of sound production (barring, perhaps, Chaplin’s CITY LIGHTS), Clair’s classic is such a seemingly effortless blend of romantic melancholy, bitter social criticism and gentle surrealism, that its many aesthetic qualities tend to overshadow the film’s astounding technological innovations in the poetics of sound. END_OF_DOCUMENT_TOKEN_TO_BE_REPLACED