Quote:
“Inside Daisy Clover” is one of those films which divides movie buffs, beloved by some and detested by others. There’s no doubt that it’s an acquired taste, thanks largely to Wood’s bravely quirky, potentially audience-alienating performance in the title role – that of a 1930s teen starlet nurtured and then devoured by Hollywood’s monolithic studio system – one Swan Studios, run by a truly frightening Christopher Plummer (a role played the same year he did “The Sound of Music”). END_OF_DOCUMENT_TOKEN_TO_BE_REPLACED 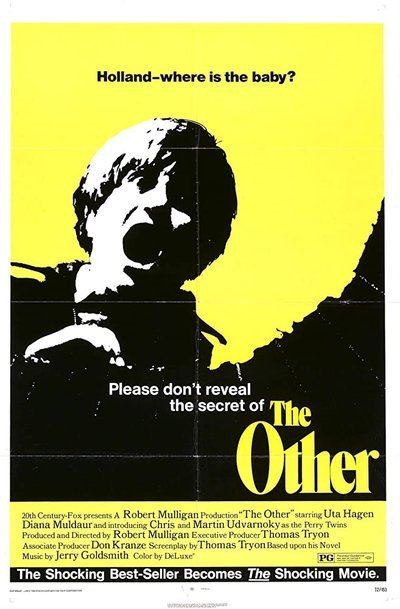 Synopsis:
In the summer of 1935, 12-year-old twins Niles and Holland Perry live with their family on a Connecticut farm. Their loving grandmother Ada has taught them something called “the game.” A number of accidents begin happening, and it seems to Niles that Holland is responsible. It is Ada who begins to see the truth, and she is the only one who can stop this macabre game of murder. END_OF_DOCUMENT_TOKEN_TO_BE_REPLACED

Quote:
Steve McQueen stars as a rockabilly hopeful, newly paroled from prison, and Lee Remick as his estranged wife in Baby the Rain Must Fall (1965), brought to us by the same triumvirate that translated To Kill a Mockingbird to the screen in 1962: writer Horton Foote, producer Alan J. Pakula, and director Robert Mulligan. A poignant slice of life shot in and around Foote’s Texas hometown. END_OF_DOCUMENT_TOKEN_TO_BE_REPLACED

Plot Synopsis by Clarke Fountain
Older brother Chubby (Paul Sorvino) is a combative, booze-swilling, rough-edged construction worker, following in the footsteps of his brother Tommy (Tony Lo Bianco). Macho in the extreme, these fellows have no time for the sensitive moral quandaries which are at the heart of the two younger brothers’ lives. Stony (Richard Gere), has worked with his father in the construction business, but longs to work with children. Albert (Michael Hershewe), the youngest, is a sensitive lad, the butt of his father and oldest brother’s rough manner, and is constantly being harassed by his stressed-out mother (Lelia Goldoni). After a few attempts to communicate with his insensitive older brother and his parents, Stony must decide for himself if the rejection he will experience from his family on leaving the construction business is worth it; and if it is, what can be done to protect his younger brother from the rest of the family? END_OF_DOCUMENT_TOKEN_TO_BE_REPLACED