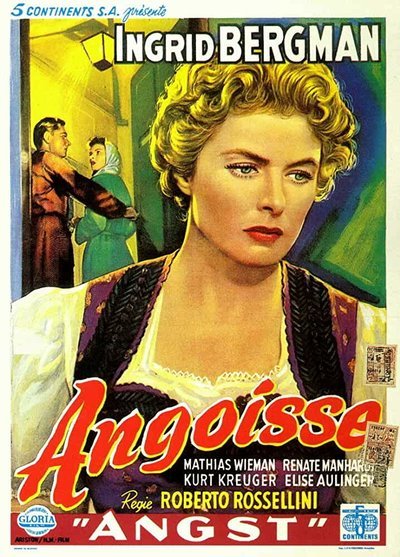 Synopsis:
Roberto Rossellini directs his then-wife Ingrid Bergman in the suspenseful drama La Paura (Fear), based on the book by Stefan Zweig. Guilt-stricken Irene Wagner (Bergman) is forced to hide her secret affair with Erich Baumann (Kurt Kreuger) from her husband, Professor Albert Wagner (Mathias Wieman), a scientist in the midst of a serious breakthrough. However, Erich’s ex-girlfriend, Joanne (Renate Mannhardt), finds out and threatens blackmail. This throws Irene into a fit of homicidal and suicidal rage. END_OF_DOCUMENT_TOKEN_TO_BE_REPLACED

An extremely rare film by Roberto Rossellini, his third feature, made under the Fascist control of Italy. Basically rejected after the War because of the Fascist content of the film, “Rossellini produces a work which focuses upon the Italian expeditionary forces on the Eastern Front and upon a Catholic chaplain representative of Italy’s religious majority…the principal character’s humanity and sacrifice seem to prefigure the good-natured priest of Rome, Open City who works with leftist Resistance leaders…Rossellini underlines the common humanity in Fascist and Bolshevik alike” (Peter Bonadella, Italian Cinema from Neo-Realism to Present). END_OF_DOCUMENT_TOKEN_TO_BE_REPLACED 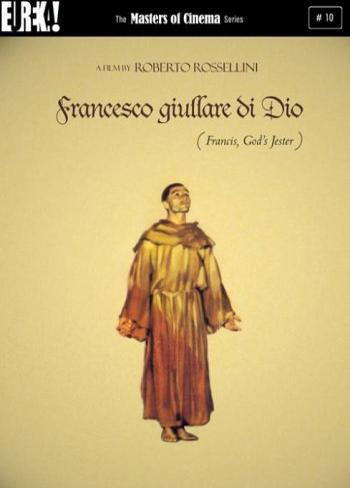 The Film:
The Flowers of St. Francis is Roberto Rossellini’s answer to the despair
of the Italian neorealism he had previously been credited with initiating;
through a disconnected series of events in the story of the popular saint,
it affirms Christian beliefs at their most pure. The original Italian title
‘Francesco, giullare di Dio’ translates as “Francis, the Jester of God.”
It is even more inspirational than Pier Paolo Pasolini’s The Gospel According
to St. Matthew mainly because of the natural behavior of the characters.
. . . Glenn Erickson, END_OF_DOCUMENT_TOKEN_TO_BE_REPLACED

The second in a series of historical films begun by Roberto Rossellini in the late 1960’s was this sublime movie for Italian television which traces the spread of Christianity in the thirty years after the death and resurrection of Jesus, according to the accounts of Luke. Most of the first part deals with the successes and failures of Peter in spreading the good news of Jesus and presents an almost documentary view of the first Christian community, the trials before the Sanhedrin, the martyrdom of Philip and Stephen. Most of the second half of this five-hour+ film follows Paul from his conversion en route to Damascus, his work with Barnabas in Antioch of Syria, his debates on the old law versus the new, his arrest. The film ends with his imprisonment in Rome. END_OF_DOCUMENT_TOKEN_TO_BE_REPLACED

Quote:
This year, the 65th edition of the Venice International Film Festival screened and restored this movie in a Golden Age retrospective. It’s a 36′ interview in 16mm with Salvador Allende, the socialist politician who had became President of Chile at that time, filmed at Allende’s villa in Santiago. Two years after the interview, Allende was overthrow and murdered by the general Augusto Pinochet, in a coup d’état which involved active C.I.A. collaboration. Human beings only have two ways to deal with one another: reason and force. If you want me to do something for you, you have a choice of either convincing me via argument, or force me to do your bidding under threat of force. Every human interaction falls into one of those two categories, without exception. Reason or force, that’s it. Rossellini’s title became prophetic and as it often happened in the History, the brute force killed the reason. This is just a Tvrip from RAI3, not the restored copy. END_OF_DOCUMENT_TOKEN_TO_BE_REPLACED

Series of programs broadcast on RAI TV in Italy showing footage shot by Roberto Rossellini in India. The series was also broadcast on ORTF TV in France under the title ‘J’AI FAIT UN BEAU VOYAGE PAR ROBERTO ROSSELLINI’. The footage shown in the individual episodes seems to have been the same in the Italian and French series.

Rossellini stayed in India for almost 9 months, refusing to look at famous monuments and rather preferring to take a non-exotic view of India, by looking at lives of common persons. END_OF_DOCUMENT_TOKEN_TO_BE_REPLACED

A documentary about Sicily and its peculiar customs, with an emphasis on religious rites and the clash of modernity versus traditional values.
At the end of the film, there’s a 6 minutes black and white interview with Rossellini. END_OF_DOCUMENT_TOKEN_TO_BE_REPLACED