Different students from a high school cleaners group each deal with different pressures of being clean and pure while also discovering that the world is dirty and superficial to begin with.

Barit developed a distinct visual palette for the film that resembles highlighted photocopies (much like books and readings common in Philippine schools). To achieve this, they finalized the offline cut of the film, exported it at eight frames per second, then printed each of those frames out to look like photocopies. What followed was months of manual highlighting of each frame before these were batch-scanned and put in place of the original offline cut. END_OF_DOCUMENT_TOKEN_TO_BE_REPLACED

Taking leave from their jobs at a gold mine, three workers journey to their home village on foot through the spectacular yet unforgiving wilderness of the mythical island of Hugaw. As time passes and their conversations intensify, buried histories emerge and a sense of psychosis invades the scene. As ever, Lav Diaz’s exquisitely subdued black-and-white images and patient rhythm lend a Brechtian register to the drama; almost always filmed from the same fixed distance, each scene is an immaculate tableau vivant. Behind the film’s folkloric façade, Diaz once again taps into the collective memory of defiant struggles against the tyranny of both contemporary Filipino society and colonial brutality, centred on the timeless image of men walking – one of the key traits of Pan. (Hyun Jin Cho, BFI) END_OF_DOCUMENT_TOKEN_TO_BE_REPLACED

Brillante Mendoza – Kinatay AKA The Execution of P (2009)

Peping, a criminology student, is recruited by his schoolmate, Abyong, to work as a part-time errand boy for a local syndicate that collects protection fees from various businesses in Manila. The easy money Peping earns is spent mostly on his girlfriend, Cecille, who’s also a student. Peping decides to marry her, but in order to do so he’ll need more money. Abyong contacts Peping to join a “special project” that pays more than normal… END_OF_DOCUMENT_TOKEN_TO_BE_REPLACED

Set in 1990s Manila, Paolo, a sheltered and obedient son is stifled by his overprotective mother— and his friend Mimaw, a tomboy who finds herself after having her heart broken for the first time.

A series of earthquakes leading up to Mt. Pinatubo’s historic volcanic eruption has been causing blackouts across the country, preventing kids from playing video games. After roaming the streets and getting beaten up, Paolo and his friends—Kachi and Gilligan—decide on traditional circumcision as the ultimate answer to their problems, but Paolo gets sidetracked when he falls in love with Shiara. END_OF_DOCUMENT_TOKEN_TO_BE_REPLACED

It tells three tales of the Filipino journey. An unemployed cameraman joins a protest march of farmers asking the government to help them reclaim their ancestral land stolen by the powerful in Desfocado. In Hugaw, it is also the powerful that controls an island where a young miner contests the problems and the status quo. A mosaic artist is empowered as he arrives at his destination while traveling from island to island in Lakaran Ni Kabunyan. END_OF_DOCUMENT_TOKEN_TO_BE_REPLACED 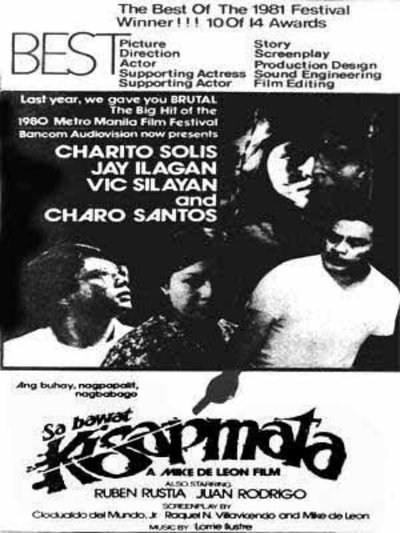 Plot: Retired policeman holds a woman and daughter in a claustrophobic grip with his dictatorial behaviour. His son-in-law resists and the result is a confrontation. A gruesome monster in his familiarity: it could be your next-door neighbour. END_OF_DOCUMENT_TOKEN_TO_BE_REPLACED

Quote:
Debuting to critical acclaim in 1998, Diaz’s Serafin Geronimo, Kriminal ng Baryo Concepcion, announced the arrival of a major talent, and a possible new direction for Philippines cinema. Where Brocka had examined society’s effect on the individual, Diaz’s Kriminal looked at the effect of the individual’s actions on his conscience. His Russian influences written on his sleeve— the film begins with a quote from Crime and Punishment translated into Tagalog— Diaz’s hero was akin to that of Dostoevsky but atypical of Philippine cinema; a quiet man with a guilty past seeking redemption in the present. With Kriminal, Diaz laid down his archetype character and began to plot the path of his aesthetic. END_OF_DOCUMENT_TOKEN_TO_BE_REPLACED