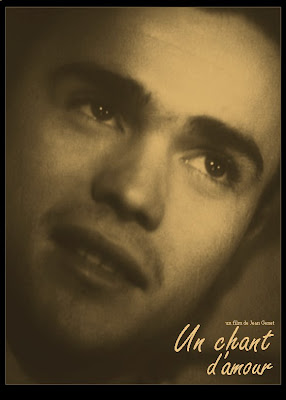 From Senses of Cinema:
Mark Adnum is the editor of outrate.net.

Jean Genet set an example for other self-performers like James Dean, Joe Orton and Andy Warhol to follow. His real life, like those of his successors, emerging as by far the most compelling work of art he produced. Like those other iconic artists, Jean Genet is Jean Genet’s consummate creation, and finding the boundary between the day-to-day realities of life and his creative existence is a bit like exploring a Mobius Strip.
Abandoned by his birth mother, Genet was brought up on a farm, where despite his academic gifts, he was unpopular for his effeminacy and insistence on speaking only formal French, rather than the local slang. Unsettled and kleptomaniac, he bounced between various carers (including blind musicians and Parisian typesetters), spent time in psychiatric institutions, and then joined the army at the age of 19. He was stationed in Syria, but soon deserted, escaping to bum around Europe, funding his travels through prostitution and petty crime. Eventually busted, he spent a long period in jail, where he wrote Our Lady of The Flowers (1942), the work that came to the attention of Jean-Paul Sartre, who secured Genet’s release and became his patron. Genet suffered from depression throughout his life, and attempted suicide more than once. END_OF_DOCUMENT_TOKEN_TO_BE_REPLACED