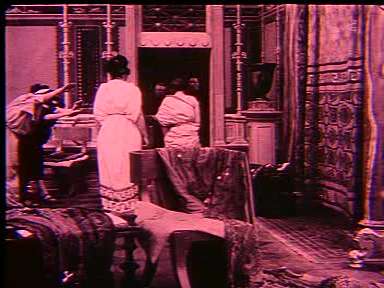 The birth of the motion picture epic is generally dated to the 1913-1914 Italian films Quo vadis, The Last Days of Pompeii, Cabiria and Cajus Julius Cesar, many of them based on a standard set of 19th century religious novels that would be made and remade over the next half of the 20th century. One of several specialists in the genre, Enrico Guazzoni filmed this second version Quo Vadis?, the prime exemplar of a subsidiary genre to “Life of Christ” films, one that might be called the “Christ vs. Caesar” genre. The title of this film means “Where are you going?” and the question is posed by the Ascended Christ to Peter in a vision as the latter departs Rome on the eve of an Imperial persecution. The main story, however, focuses on a Roman commander, Vinicius, who falls for a Christian girl, Lygia, and is so drawn into the underground Christian community, experiencing a personal transformation along the way.

Meanwhile, would-be-poet emperor, Nero, burns Rome for his inspiration and blames the tragedy on the Christians, bringing the conflict between Christ and Caesar, as always, into the arena. The inevitable meeting of the Roman arena and motion pictures matched the first worthy successor to the former in thousands of years. The Biblical Epic has proven a way of having the best of both worlds, an excuse to dwell upon the gory spectacle in all its gaudy sex and violence, then wash it all clean with a religious martyrdom. And while Quo Vadis? is ostensibly about choosing directions, the film somehow contrives to have it both ways, both Christian martyrdom and political revolution, with Vinicius leading the choice not so much for Christ as against Caesar.

The arena scenes here introduce epic scale in terms of extras in the stands, variety of action and performers (including animals), and depth of composition. But film directors still hadn’t figured out that they could actually move the camera — there’s not so much as a simple panoramic shot here — so the epic mode at first was generally utilized by passing elements through the frame: marching soldiers, a massive boat floating by Nero’s summer home, people fleeing the fires of burning Rome. In a couple sequences, we see some experiments in cutting the action into smaller angles, including point of view shots, but these are the exception to the rule, which involves static medium-wide shots separated by title cards — which are more often than not redundant in merely telling us what we’re about to see. The original story is a bit more complicated and shaded than is able to be communicated in this silent film, despite the epic number of reels — twelve, a new record for the cinema, making this film the very first “feature-length” movie. Thus while this film expanded the possibilities of cinema, it also bumped up against the limitations of that era. 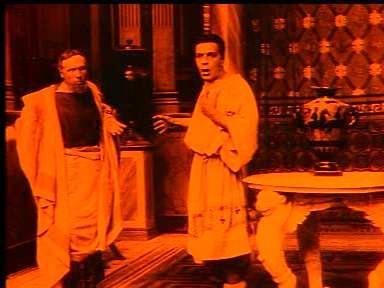 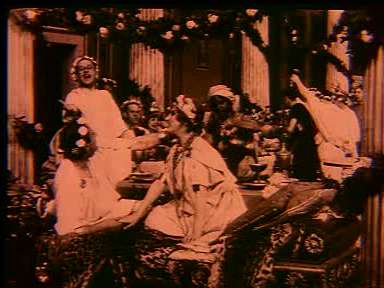