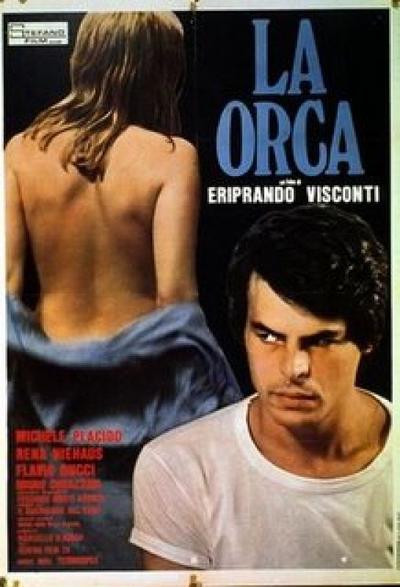 Kidnapping movies were really big in the 1970’s, especially after several high-profile cases like Patty Hearst. The Italian exploitation industry is notorious for taking its cues from the US movies, but that may not have been the case here since there was even a bigger kidnapping problem in Italy (eventually leading to the kidnap and murder of a former prime minister by the notorious Red Brigades). The kidnappers in this movie though are pretty low-rent types, barely connected to the Mafia. Their victim is a very spoiled, but perhaps not especially rich, teenage girl (Rena Neihaus) whose parents seem unable–or perhaps unwilling–to get her back (she hints at an incestuous relationship with her stepfather which might have been explored in the sequel to this “Oedipus Orca”). In this movie the youngest, most handsome kidnapper (Michele Placido) falls for the girl in kind of a reverse Stockholm syndrome, with tragic results for at least one of them. The end of movie, strangely enough, is kind of reminiscent of “Last Tango in Paris” but with nowhere near the dramatic gravitas

The movie is generally lacking in character development. The film at one point follows the creepiest-looking gangster (Flavio Bucci from the “The Night Train Murders”) to his home where he is shacking up with another gangster’s wife and her kid, but more than character development this seems to be more an excuse for another sex scene. The Placido character has an interesting flashback of him working on a filthy fishing barge, which is contrasted with a fantasy where he is piloting a yacht. This movie is very class-conscious in the way it has this poor Sicilian boy falling for a rich, northern girl (the Italian title “La Orca” comes from the designer outfit she’s wearing). Placido is pretty good here, but this handsome, light-complexioned hunk is not too convincing as a lower-class Sicilian ruffian. As for Neihaus, I can’t decide if she is a bad actress, or is just playing a really obnoxious character (she’s more Paris Hilton than Patty Hearst). She does get naked several times which, judging from the English, title was the primary consideration.

This movie has a bit of a bad reputation, but I don’t know why. It’s not nearly as brutal as similarly-themed American films like “Date with a Kidnapper” or “The Candy Snatchers”. I believe Niehaus’ character is underage, but the actress obviously wasn’t (she’d been in “Playboy” two years earlier). Maybe it offended people that the victim is made so unsympathetic, but that doesn’t explain why she returns in a sequel. . . I dunno. Check it out for yourself and see what you think.