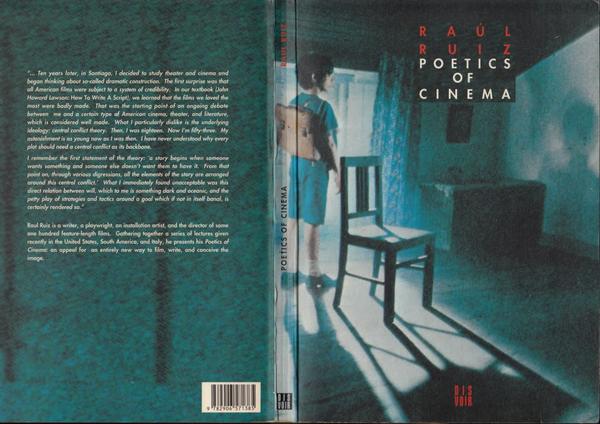 From the article linked to above:

Quote:
Ruiz’s Poetics of Cinema must be one of the strangest and most interesting works on the cinema ever to be written. While addressing many contemporary issues around the politics of the entertainment industry, globalisation and the powers of audiovisual images, this work also draws on discourses as untimely as ancient treatises on Chinese painting and the 16th century occult theories of Ramon Lull. But perhaps what is most striking about Poetics of Cinema is its composition in which not only diverse theories and reflections are combined but that they are done so frequently in the form of theoretical fictions as delirious as Ruiz’s cinema itself, that completely blur the boundaries between the real and the imaginary, the true and the false. This has led several critics, notably, Christine Buci-Glucksman to make direct links between Ruiz’s aesthetics and the Baroque, rather than more contemporary aesthetic movements such as Surrealism (Buci-Glucksmann, 9-41). As Laleen Jayamanne has pointed out, Ruiz may use the “decorative and stereotypical aspects of Surrealism” but he rejects its underlying metaphysics in favour of a Baroque “allegorical system” (224). The crucial difference between the Baroque, as Ruiz understands and employs it and the ethos of cinematic Surrealism, is the replacement of the motto “everything is fundamentally simple” with its opposite “everything is fundamentally complex”. Jayamanne emphasises that cinema, for Ruiz, is an allegorical system inhabited by ghosts, zombies and the dead, which operates by a “perverse logic” (224) or a “baroque […] multiplication of points of view, of an object, of a space, [of] a body” (225). Already this affinity between the complexity of the Baroque and perversion is apparent: for Ruiz, Surrealism is inferior to the Baroque because it remains too French, or in other words, fails to be complex or perverse enough.