The term ‘visual arts’ that is prevailing in modernity is really a symptom for the reduction of perceptional categories within the human creativity as a whole. An anthropological conception of art – and I have proved for instance in sculptural theory that you hear a sculpture before you see it, that consequently the auditive element is not just an equal part, but a constituent of the perception of plastic art – confronts you with the task of exploring the conception of creativity in all directions, of spreading it out and substantiating it anthropologically. So for instance, the human creativity potential as a whole doesn’t only comprise the recognition criteria in thought, but it also comprises the sensational categories in the middle of the soul, that is, the moving element, and it positively comprises the will potential in human will. It is this interpretation of human creativity potential, beginning with the triple position, the connections of will, sense, and thought categories, which will get you to the more differentiated position of considering the perception, too, and thus the connection of human senses, discovering that for example seeing, the visual sense, the auditory sense, the static sense, the architectonic sense, the haptic sense, can be thought forward into the sense of feeling, the sense of will, the sense of thinking, and many other still to be developed senses.
This means: Man in his creative potential is a developing being, and in the next cultural epoch, which is what we are trying to reach and where the conception of self-determination of man in all positions of work can lead to free development of human activities, we shall be confronted with the possibility to develop new sensory organs, new qualities of creativity in the given entities of will potential, potential of feeling, and thus potential of movement and an intellectual sense of form and thought. So, when I chose primordial materials, such as fat, felt, or copper, I could, to a certain extent, anticipate, that such materials would have a provocative effect in the time I’m living in, which means they would provoke questions for reason and purpose. So these materials were not chosen to do again what has been done already by Duchamp, that is, to exercise in a way a revolution in the museum without acting accordingly with regard to the conception of capital. I could not afford that; those materials, however, have proved to be adequate, with regard to fat, to will potential, with regard to copper, to the element of movement, and with regard to felt, to the isolating, analytical characteristics in thought. So, the sculptural theory contains the possibility to orientate the entire social organism to a new level, and thus to a new height, and thus to a future human culture, and simultaneously to systematically state the measures that should be taken to get from the given to a future form. ‘To get back to the willing, which is a completely neglected category in science of creativity: we also have to deal with the conception of warmth, which I have quite often brought up in sculptural theory as a possibility to really hatch the future in this element of warmth or will as in an – I might say – aesthetic willing. It has become obvious, however, that this hatching process may indeed begin in a chaos of warmth, but that it does require strategy and tactics to lead to future possibilities of man; this has also been shown by the critical reproaches against an attempt like that, which made it necessary for the author to give accordingly deep reasons. That this whole approach, that this whole approach, that this whole approach ……. 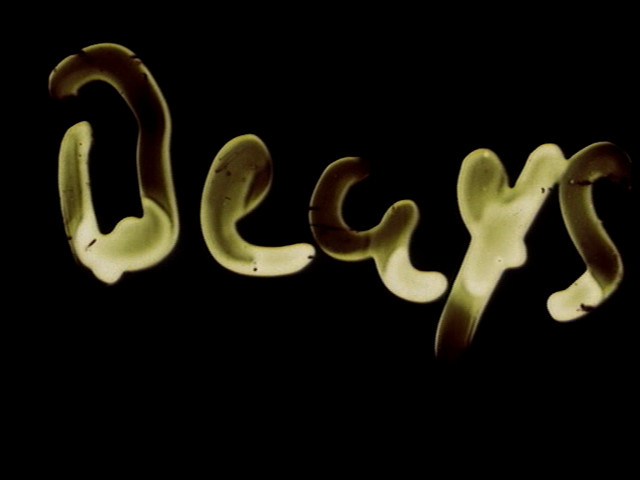 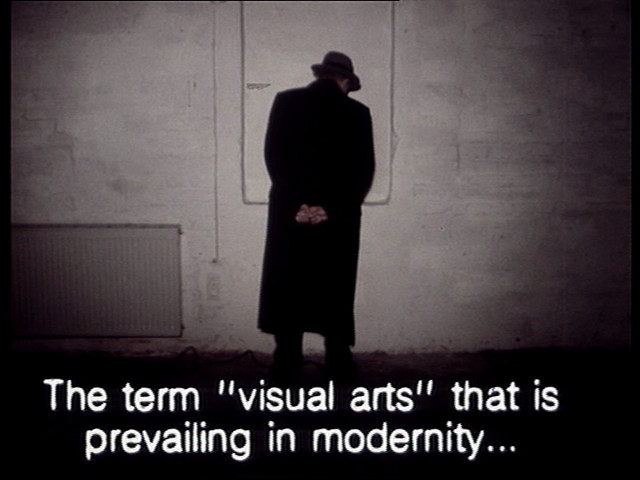 The first thing to strike you about this DVD release is its content: a single film, totalling only 10 minutes and 30 seconds, and absolutely no extras. Admittedly that film does come in two versions – with or without its burnt-in English subtitles – but this provides a choice present solely for language reasons; in all other respects both versions are completely identical. As such we’re not faced with the greatest of enticements – beyond the fact that this is already a disc which will sell only to niche audience – but then Beuys isn’t your typical offering. In spite of its barely there running time it manages to be a dense, playful and provocative work; it shouldn’t be gauged simply by the number of minutes it lasts for, but rather the number of repeat viewings it prompts. Indeed, once you’ve selected which version of the film you wish to watch the disc then happens to play on a continual loop – a fitting quality as you’ll wish to return to it immediately.

Ostensibly, and as the title should hopefully have suggested, Beuys is a documentary on the German artist Joseph Beuys, a renowned figure in modern/contemporary art circles and one recently treated to a major retrospective at Tate Modern. This may put the film in the same category as, for example, Clouzot’s La Mystère Picasso, Rivers and Tides (on Andy Goldsworthy) or Right Out of History (on Judy Chicago), yet for each of their respective qualities these works offer essentially conventional records of their subjects. Beuys on the other hand takes a more conceptual approach and as a result perhaps shares a closer kinship with Gilbert and George’s contemporaneous feature The World of Gilbert and George. Here we find Beuys effectively given free rein – his is the only voice, indeed only sound, which we hear; he is the only person to appear onscreen, and in a single take at that; and even the opening credits seem unnaturally hasty in their efforts to move out of his way, having been written directly onto the celluloid and over in seconds – but crucially he doesn’t figure in the expected manner. Rather we find him facing a wall, with his back to the camera and placed in a spotlight so that he becomes almost a silhouette.

Indeed, all we see are the hands behind his back and his equally stationary right ear, the rest of his body having been engulfed by a hat and sizeable coat. Under such circumstances he resembles nothing more than a big screen gangster, one in a firing line perhaps or an informant trapped in an intense spotlight. Moreover, the décor seem to match such an interpretation: the walls are painted white and are completely bare save for some electrical fittings which presumably no longer work; apart from Beuys himself the only other visible object is a radiator of standard persuasion. All told it appears that we’re in either a disused factory or some abandoned warehouse – either way it’s a stark environment, but also one teeming with atmosphere.

So quite how do we take the film? Have directors Werner Nekes and Dore O. got Beuys in the firing line, forcing him to issue some “famous last words” as it were? And if so, are they this from a “friendly” perspective or perhaps something a little more aggressive? Certainly, he’s the star of the piece and gets his name in the title and even though we never see his face, would not a conventional ‘talking heads’ approach have been the more familiar, and therefore anonymous, approach? Indeed, in this instance he’s afforded a great deal of charisma, treating us to long pauses for maximum dramatic effect, sharing the attire, as said, of a movie star, positioned in such a way so that every movement becomes apparent, and, most importantly, able to command our attention from the very first syllable he utters.

Of course, there’s a major possibility that Beuys’ conception would outweigh its content, but really this isn’t the case. Rather the film’s true heart lies in what its subject has to say for himself – his theory on art and perception, how this fits into his own artistic output, and the ramifications it will have in the future, during “the next cultural epoch”. The key question to ask ourselves is not whether the concept is more important than Beuys, but whether it has the desired effect. Had Beuys been a conventional documentary portrait would we be paying it so much attention? Would we return to it time and again? And would it still feel, even on the umpteenth viewing, as though it still had secrets to share?

As noted at the beginning of this review, Beuys comes with no extras, only two versions of the same film. One offers burnt-in English subtitles for non-German speakers, whilst the other presents the film simply with the German dialogue. Presumably this was done as it was a cheaper way for Werner Nekes to release the film (the disc is available exclusively through his website – see below for details) than going through the process of creating optional digital subtitles, but as a result we find some discrepancies between the two versions. Most notably, the English subtitled version has its opening titles rendered in yellow and is generally the darker of the two, whilst the original version has green titles and appears to be somewhat brighter. In both cases the level of damage – minor scratches and the like – is roughly equal, whilst the differences don’t affect our enjoyment too much. Indeed, it’s also worth noting that as Nekes is distributing the film himself it is therefore likely that we are getting the films in the best condition possible. Certainly, the soundtrack attests to this being crisp and clear throughout.