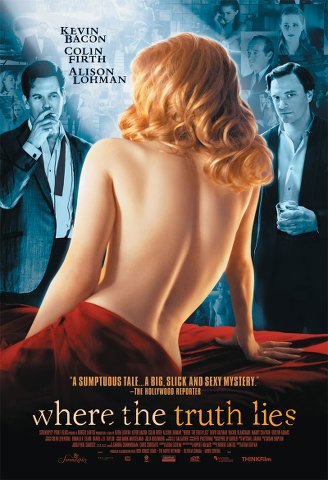 From AMG:
A reporter unexpectedly gets a personal perspective on a legendary show-business story in this adaptation of Rupert Holmes’ novel, scripted and directed by noted Canadian independent filmmaker Atom Egoyan. In the mid-’50s, Lanny Morris (Kevin Bacon) and Vince Collins (Colin Firth) were a wildly popular comedy team who suddenly and unexpectedly broke up at the peak of their popularity. Fifteen years after Morris and Collins called it quits, journalist Karen O’Connor (Alison Lohman), who has earned a reputation for her celebrity exposés, wants to write about the true story of what happened with Morris and Collins — and to her surprise, her publisher tells her Collins has agreed to co-author the book for a cool million dollars. The only catch is that Collins has to tell the full truth about a very large skeleton in the team’s closet — a beautiful naked woman was found drowned in the bathtub of Morris and Collins’ hotel suite shortly before they broke up the act, and while the comics were cleared of any wrongdoing, rumors about the incident followed them for years. As O’Connor and Collins complete their book, they learn to their surprise that Morris has opted to write a book of his own about the team’s career; eager to learn what Morris has to say, O’Connor meets him posing as a schoolteacher, and soon falls into an unexpected romantic relationship with him. O’Connor soon finds herself playing two sides against one another as she tried to learn the truth about two men with dark and scandalous pasts. Where the Truth Lies became the subject of unexpected controversy when the MPAA gave the film an NC-17 rating due to a brief scene involving a ménage à trois; the film earned significantly more lenient rating in other countries.