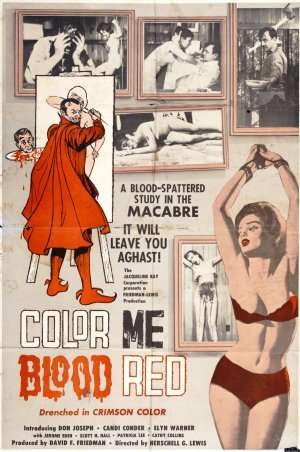 SUMMARY
An eccentric artist is panned by a well-known critic at his opening for not having a good color sense, so he starts a new series, using his own blood to paint. Soon he is weakened and must find other sources of blood to continue his paintings.
Ed Sutton on IMDb

REVIEW
A Deeper Shade of Red: Color Me Blood Red
Contains minor spoilers. Color Me Blood Red was the final installment in Herschell Gordon Lewis and David Friedman’s infamous “Blood Trilogy”. The three films (Blood Feast, 2,000 Maniacs, and Color Me Blood Red) would most likely have been consigned to the annals of bad exploitation cinema if not for one thing—they were the genesis of the modern day gore film. Made with a miniscule budget, no-name actors, and primitive FX work, Lewis’ films were the first movies to showcase blood and guts in loving detail. And while they’re always tongue-in-cheek in their presentation, they still managed to shock the world with their sheer audacity.

Color Me Blood Red finds Lewis becoming a more skilled craftsman behind the camera. Yes, the problems that mar the majority of his work are still present (bad lighting, terrible sound quality, and the inability to coax a decent performance out of most of the cast), but the rough edits, off-centered shots, and other problems from the earlier outings are a lot less abundant this time out. The downside to this new and improved H.G. Lewis is that Color Me Blood Red is the least gory of the “Blood Trilogy” films—and let’s face it, no one watches Lewis’ films for anything other than the often inventive carnage.

Instead of a straight-up gore film, Lewis has crafted more of a dark character study, focusing on demented painter Adam Sorg (played by Don Joseph). Sorg (whose name is the word “gross” spelled phonetically backwards) can’t quite make any inroads in the Florida art community. His work is lacking, according to the critics, which drives the man to the edge of sanity. Sorg solves the problem of his art after his girlfriend cuts herself on a nail and bleeds on a canvas—at long last, Sorg has found the red he needs for his work…human blood! To finish his work, he begins cutting his own fingers and bleeding on his canvases—but he doesn’t have enough blood of his own to finish the painting. So, what does our tortured artist do? Why, he murders his girlfriend and uses her blood as his paint.

Sorg’s new piece is a hit with the local art community, but it’s not enough—to prove it’s not just a flash-in-the-pan, the painter must create more—which means more blood. Sorg goes on a minor killing spree before setting his sights on the lovely April (Candi Condor). April and her friends (including two super-annoying slang talkers) spend a lot of time at the local beach near Sorg’s house. Will April fall victim to this diabolical painter? Only those who check out the film will know for sure…

The film’s greatest strength is easily the performance of Don Joseph. Joseph brings the tormented Sorg to life, and while he regularly strays into the realm of camp, there’s still something surprisingly genuine about his portrayal. Equally impressive is the way Joseph dramatizes Sorg’s slow descent into complete and utter madness. Sorg starts off as an eccentric, but as the film progresses, the weirdness of the artist takes a gradually more sinister tone. It’s a surprisingly nuanced performance for a Lewis film, for sure.

The rest of the cast doesn’t fare nearly as well. Bill Harris hams it up as a snooty art critic and regular ensemble actor Scott Hall plays the owner of the local gallery. Still, neither performance is as annoying as Patricia Lee and Jim Jackel’s groovy teenagers. Every line these two utter is completely cringe-inducing.

Despite this, the biggest criticism one can level against Color Me Blood Red is that it just isn’t very gory. The film’s first murder is particularly restrained, and even an impaling from a boat and intestinal dismemberment sequence isn’t up to the usual Lewis standards. Even when the gore is onscreen, it’s surprisingly quaint—it’s hard to imagine anyone who’d sat through Blood Feast even batting an eye at this one. Lewis appears more interested with getting numerous shots of people on “aqua-bikes” than he does in capturing any sort of cinematic carnage. Occasionally, Color Me Blood Red seems more like a commercial for the aqua-bike industry than an actual gore film…

Color Me Blood Red has turned up on DVD as part of the H.G. Lewis collection. The disc, like the others in the series, is nothing short of impressive. The prints look surprisingly nice (although the audio still suffers) and the plethora of extras is sure to delight anyone who’s at all interested in making low-budget films or the origins of gore cinema. Lewis’ commentary track, as usual, is the definite highlight. He’s such an affable fellow that listening to him reminisce about these films is a genuine treat. I only hope to one day get an opportunity to chat with him in person.

While this film isn’t likely to satisfy the hardcore gorehounds in the same way that the two earlier entries in the trilogy did, Color Me Blood Red is still well worth seeing because it highlights H.G. Lewis’ continuing evolution as a filmmaker. Add in the entertaining performance from Don Joseph and a few almost gory moments and fans of camp cinema should find more than enough to keep them entertained with this one.
Epinions.com, April 13, 2005 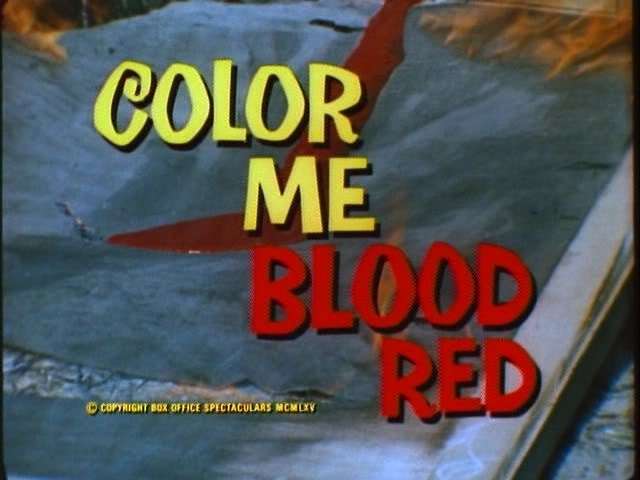 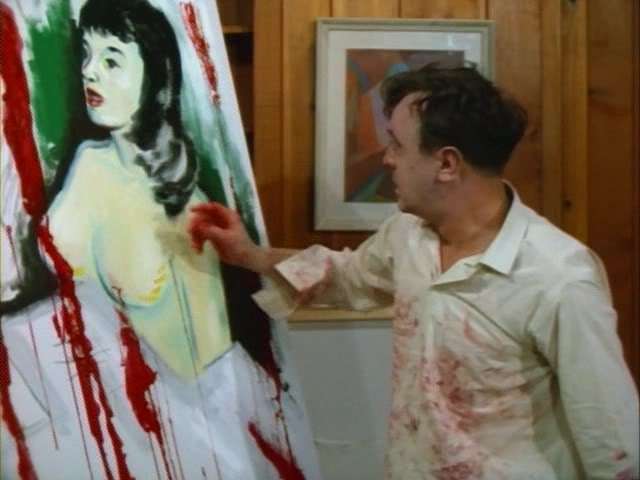 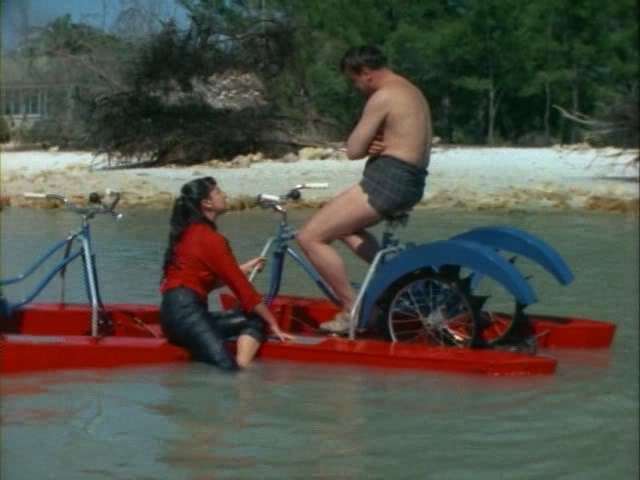 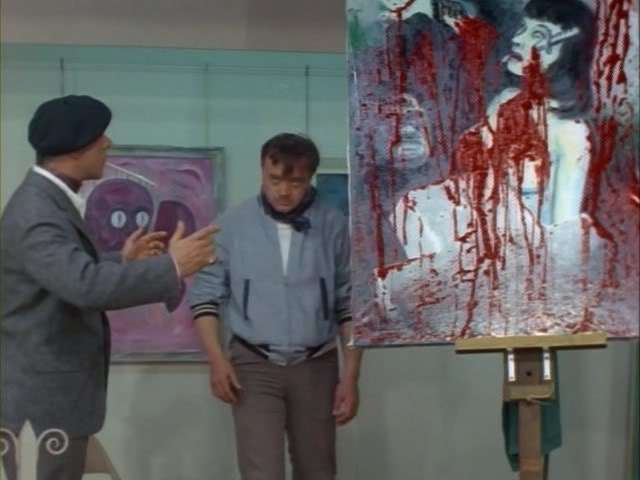 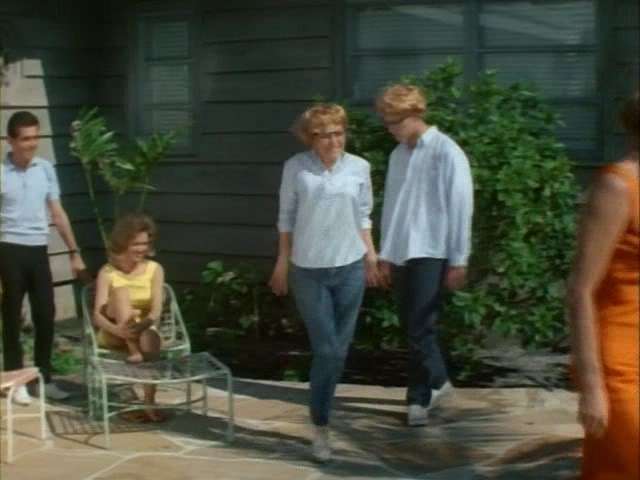