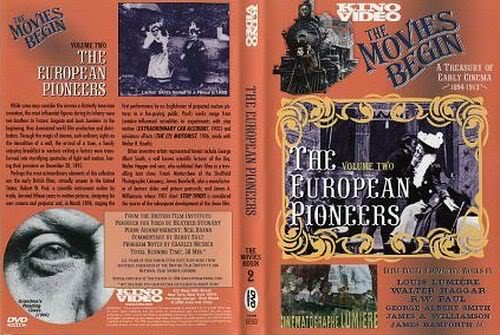 The European Pioneers
Director: (various)
Country: (various)
Year: 1895-1906
From the archives of the British Film Institute, this collection features forty distinctive works from cinema’s infancy, produced by such Euro pioneers as R.W. Paul, George Edward Smith, Fran Mottershaw, Walter Haggar & Sons, and James Bamforth, as well as by acknowledged innovators like the Lumière brothers and Méliès. Includes Demolition of a Wall (1896), Exiting the Factory (1895), and Arrival of a Train at La Ciotat (circa 1895).
—–
While some may consider the cinema a distinctly American invention, the most influential figures during its infancy were two brothers in France: Auguste and Louis Lumière. In the beginning, they dominated world film production and distribution. Through the magic of cinema, such ordinary sights as the demolition of a wall, the arrival of a train, a family enjoying breakfast or workers exiting a factory were transformed into mystifying spectacles of light and motion, having their premiere on December 28, 1895.

Perhaps the most extraordinary elements of this collection are the early British films, virtually unseen in the United States. Robert W. Paul, a scientific instrument maker by trade, devoted fifteen years to motion pictures, designing his own camera and projector and, in March 1896, staging the first performance by an Englishman of projected motion pictures to a fee-paying public. Paul’s works range from Lumière-influenced actualities to experiments with stop-motion (Extraordinary Cab Accident, 1903) and miniature effects (The (?) Motorist, 1906, made with Walter R. Booth).

Other inventive artists represented herein include George Albert Smith, a well known scientific lecturer of the day; Walter Haggar and sons, who exhibited their films in a travelling tent show; Frank Mottershaw of the Sheffield Photographic Company; James Bamforth, also a manufacturer of lantern slides and picture postcards; and James Williamson, whose 1901 short Stop Thief! is considered the source of the subsequent development of the chase film.