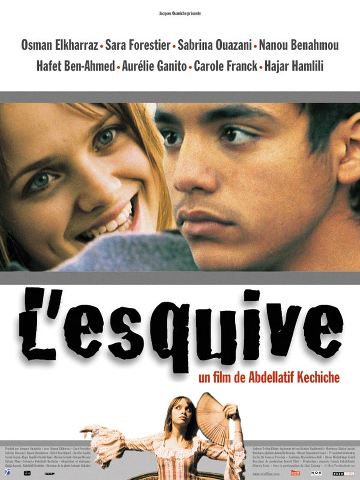 someone at imdb writes: This movie is getting fresh exposure in France thanks to its win at Les C?sars, or the “French Oscars” as other countries like to call them. Its success will probably mean that it now gets exposure outside the country, too, and I wonder how successfully.

Though an accurate and contemporary examination of France, the film’s world is a foreign one, even to many people living here–the specificity of the setting (the projects, in a “suburb” of Paris), the language (rapid-fire, slangy, “vulgar”, and peppered with “verlan”, a street language of inverted syllables–the word itself could translate as “wardsback”, and how anyone will translate this dialogue I have no idea), and the behavior (mostly arguing–strident, pushy, beautifully repetitive) may not play clearly outside of France. I’m not sure how clearly it plays here, or how willing people are to watch it, especially as it turns the idea of the scary bad French projects somewhat on its ear.

This isn’t a criticism of the movie; on the contrary. Kechiche has shot a riveting cross-section of teenagers growing up in social housing, in broken homes and poverty, who lack the tools of expression, and who have adopted the posturing of the wounded (and, in the story, almost entirely absent) adults who raise them, attacking (the movie unfolds at a near-constant level of verbal aggression) and dodging (“esquiver” means “to dodge” or “to evade”) one another’s attacks with all they can muster.

The film’s intensely political side feels almost accidental; in its unfolding, it has great heart, and its actors, who are apparently mostly amateurs from around the shooting location, are outstanding. On the whole, it reminded me a great deal of David Gordon Green’s George Washington: a simple love story set against a landscape of poverty, played out frankly and honestly, allowed to unfold at a distinctly un-Hollywoodian rhythm. If Green’s film is more beautiful cinematic ally, L’Esquive is more concentrated, more unflinching in its examination of the deep repercussions and violence of economic, social, and familial hardship. Its statement that France is no longer a country of the French-of-French-ancestry, and that its refusal to accept its own transformation does not mean its lost generation accepts its loss, could not be more clearly nor more poignantly made.

Without spoiling or going into detail, there are things about the plot that are implausible, things that probably hurt the film overall, but watching this movie for plot is like watching Ocean’s Eleven for social insight. This is a positive study of character in a bad situation, of a stratum of society rarely filmed and still more rarely treated as fairly as it is offered up here, beautifully and eloquently.