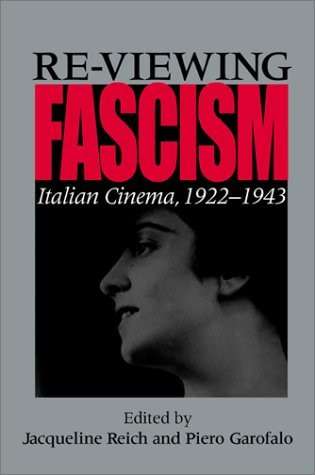 “Each essay makes a point of correcting misconceptions about the cinema during the ventennio [the period of fascist rule], which makes this book a significant contribution to the literature.” — S. Vander Closter, Rhode Island School of Design, Choice, December 2002

Reich (SUNY, Stony Brook) and Garofalo (Univ. of New Hampshire) have edited a collection of 12 essays treating Italian cinema during the ventennio, the period of fascist rule. Part 1 addresses the cinema’s construction of subjectivity (particularly female), linguistic diversity (which challenged the transition from silent to sound cinema), neorealism, and the role of telecommunications and cinema in the formation of nation. The focus shifts in part 2: David Forgacs suggests new ways of identifying the transgressive aspects of regulated and conservative representation of sex in the cinema; others offer a recuperative homosexual reading of Ossessione and an analysis of the colonial discourse of Sotto la croce del sud. Among the essays in part 3 is an examination of the Soviet influence on Italian films of the 1930s; a redefinition of escapist films and their link to contemporary social realities; a reading of Grandi magazzini and the female subject in the context of urban consumerism; a discussion of the 1942 Venice Biennale International Film Festival prize winners and the signs they contain of the deep contradictions and weakness of the fascist regime. Each essay makes a point of correcting misconceptions about the cinema during the ventennio, which makes this book a significant contribution to the literature. Upper — division undergraduates and above.S. Vander Closter, Rhode Island School of Design, 2002dec CHOICE

Product Description
When Benito Mussolini proclaimed that ãCinema is the strongest weapon,ä he was only telling half the story. The first English-language anthology devoted to this subject, Re-viewing Fascism examines just how many films failed as ãweaponsä in creating cultural consensus and instead came to reflect the complexities and contradictions of Fascist culture.

About the Author
Jacqueline Reich is Assistant Professor of Italian and Comparative Literature at the State University of New York at Stony Brook.