Amol Palekar – Bangarwadi AKA The Village Had No Walls (1995) 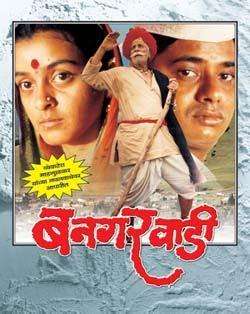 From Wikipedia:
A story of a small hamlet of shepherds set more than half a century ago but the story still repeats itself today.

The newly appointed village schoolteacher arrives in the hamlet. Faced with hostility, he decides to win over the hearts of the people so that they would entrust him with their children. He starts to address their small concerns of daily life, help them with running errands in the small town, and mediates in their disputes. Soon his school starts flourishing with enthusiastic students and parents. The high point is the building of the community gymnasium with the participation of all the villagers and the inauguration by the prince of the state.

The usual joys and sorrows of daily life continue amidst the growth of the school. It is as if the young teacher lived through a couple of thrilling dramas, a few interesting short stories and a long epic novel about the life of simple common folk. But with time, drought forces the shepherds to migrate in search of pasture. The teacher is transferred and as he leaves by the same path as he had arrived, he now has a profound insight into the ways of nature and the lives of these simple people with their maturity, simplicity, even nobility in their self-dependence and approach to problems with conscience and a sense of justice and fair play.

From the back of the case:
A young man takes a journey on a cart through jungles to reach the small hamlet of Bangarwadi, inhabited by a few shepherds, peasants and some members of a criminal tribe known as the Ramoshis. The young man goes there as a teacher. After the initial trauma, he finds the milieu and the environment very inspiring and educative. But then he is transferred to some other school. What remains with him is the memory of the simple folk and their pure nature.