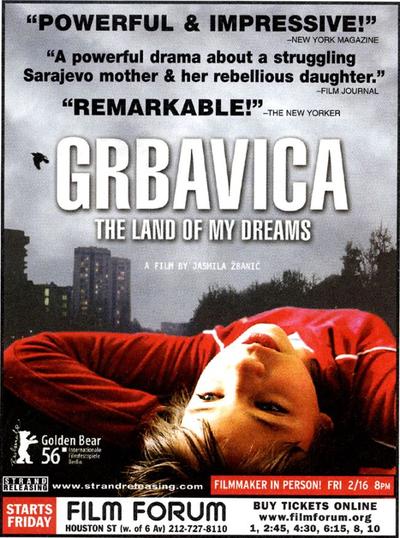 A woman sees her own traumatic past reflected in the actions of her teenage daughter in this drama from first-time writer and director Jasmila Zbanic. Esma (Mirjana Karanovic) is a single mother trying to raise her teenage daughter, Sara (Luna Mijovic), in Sarajevo in the wake of war. While Esma works as a barmaid at a nightclub run by Saran (Bogdan Diklic), a man on the wrong side of the law, she has trouble making ends meet, and receives occasional benefits payments from a support group for women who have been affected by the war. Esma has little interest in talking about the loss of her husband, whom she claims was a hero fighting for Bosnia, and can become hyper-emotional with little provocation. As Pelda (Leon Lucev), one of Esma’s co-workers at the club, attempts to interest her in romance, Esma notices that Sara has caught the eye of Samir (Kenan Catic), a rebellious young man who is one of her classmates. As Esma tries to discourage Sara from becoming involved with Samir, she finds fate has forced her to tell her daughter the truth about her father. Grbavica received its world premiere at the 2006 Berlin Film Festival. ~ Mark Deming, All Movie Guide