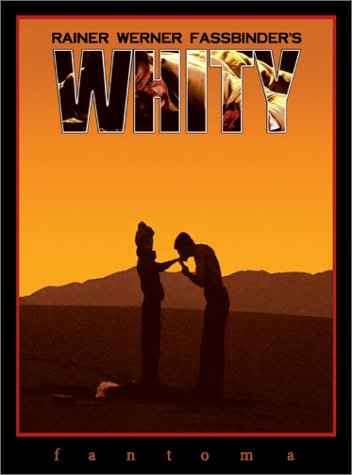 Description: Perhaps the most iconoclastic Western ever made, Whity is simultaneously entertaining and deeply disturbing. Set in April 1878, it tells the story of the title character, who is the illegitimate son – and de facto slave – of the dissolute and “dying” patriarch Ben Nicholson and his African-American servant. But Ben is only faking his illness to test the loyalty of his wife and two demented sons. Each monumentally dysfunctional family member tries to bribe and/or seduce the bisexual Whity into murdering the others in order to claim what they think is the imminent inheritance.

Although Fassbinder is aware of, and uses, the iconography of the Western – cowboys, horses, frontier towns, saloon girls, and lots of guns – his heart is clearly with the genre’s subversive tradition. Openly gay, Fassbinder likely appreciated the homoerotic subtexts of two landmark Westerns, Hawks’s homoerotic Red River (1948) and Ray’s iconically lesbian Johnny Guitar (1954). Whity was also influenced by such other unsettling masterpieces as Ford’s The Searchers (1956), with its emphasis on racism, and Peckinpah’s The Wild Bunch (1969), with its apocalyptically violent finale.