Robert Bresson – Lancelot du Lac AKA Lancelot of the Lake (1974)

REVIEW
Images Journal, by Gary Morris
Moving along to 1972, and into much darker territory, we come to Lancelot of the Lake. This was a long-cherished project for Bresson, one he began preparing before shooting A Man Escaped but did not finish until nearly two decades later. For this proposed chronicle of the aftermath of the Knights of the Round Table’s search for the Holy Grail, Bresson hoped to make two versions, one English and one French. He failed to secure financing for this, but no matter. With a Lancelot this good, one is enough.

The film opens with grimly beautiful imagery that will be repeated in variations throughout: a dark forest in which knights in sleek, shining armor are cut down, with blood gushing from dying, sometimes decapitated bodies. King Arthur’s knights, led by his greatest, Lancelot, are returning in disarray from their failure to find the Grail. This epic failure is the first of many that filigree the film. Lancelot, inspired by a spiritual vision, tries to end his adulterous affair with Queen Guinevere, wife of King Arthur, but Guinevere refuses. When Lancelot’s does decide he wants her, the unity of the knights further splinters. Dissolute and despairing, they form warring factions, with Mordred, as dark a presence as his name suggests, leading the group against Lancelot. In this world even friends fail to recognize each other. This can have lethal results, as when Lancelot unknowingly spears his beloved friend Gawain, both men’s identity hidden behind their helmets.

The centerpiece of Lancelot is a bravura tournament sequence in which Lancelot brutally dispatches a series of opponents. Here we see Bresson’s artistry at its most concentrated. Classical film technique would dictate an approach that lets the viewer know who is fighting, showing their faces, certainly, and situating them in the filmic space in a way that makes the fast, violent action of battle as intelligible as possible. Bresson inverts this approach, perversely cutting the heads of the jousters out of the frame, showing the horses’ legs or flanks, a musician unseen from the neck up, and a series of flags raised to indicate victory. Intercut with these images are shots of the other knights watching and reacting from the stands at things the viewer never sees in their entirety.

This fragmentation pervades the film, particularly the decapitation motif. Bresson, the most controlling of directors, is doing the same thing to these characters that they are doing to each other, fragmenting, attacking, symbolically beheading them with these repeated shots from the neck down. We know it’s Lancelot in the tournament but not because we can see him–he’s hidden by his helmet or truncated by the frame. These are not whole, realized beings, and cannot be in the world the film surveys. Here and throughout Bresson pays as much attention to the polished armor and chain mail the knights use for protection as to the characters themselves. They have literally “gone to pieces” in the spiritually desolate world of the film. Critic Richard Roud has suggested that Lancelot’s constant close-ups of the armor, and the clanking, groaning-metal sounds heard frequently on the soundtrack, symbolize the code by which these knights live. But the armor can also be read as another of the film’s failure motifs, as, despite its seeming strength, it fails to protect them from the lethal arrows of Mordred or Lancelot’s lance. The constant emphasis on the surface–Bresson famously said “Think of the surface of the work”–of steel and mesh in fact points to the severe vulnerability of the body. The armor is laughably ineffective, almost pointless, a flimsy barrier unable to guard the weak body from the forces that assail it. Lancelot is littered with images of the knights’ life blood pouring out onto their glittering armor, images that echo the failure to find the Grail that contained the blood of Christ. Unlike Fontaine and Jost, there is no redemption for these men. In this most carefully crafted film, the images of their destruction shimmer on the screen , shapes and colors as dramatically etched as an engraving by Albrecht Durer.

Like his other films, Lancelot is saturated with spirituality, but it’s not the spirituality of salvation. This insular world seems alternately godless and at the mercy of a malevolent deity. The failure of the Grail quest is the failure to find God, and thus salvation, something the film makes explicit in Guinevere’s rebuke to Lancelot: “It was not the Grail. It was God you all wanted. God is no trophy to bear home.” The castle to which the knights return is seen as a place devoid of the spirit: “Is this silent, empty castle a sign He has forsaken us?” says Lancelot. This spiritual emptiness plays out in the horrendous violence these mysterious, often disguised characters inflict on each other. Bresson’s use of actors as “models,” their every move planned and controlled, has never been more effective. They are hapless players in a drama outside their control, clinging to outdated chivalric codes and weaponry that can do nothing to save them. Guinevere tells Lancelot, “I am your strength”–but she is not enough either.

As always with Bresson, the soundtrack is as controlled as the characters. Most telling is the use of creaking, clanging armor in the knights’ movements, flights, and jousts. It’s hard not to read these disturbing sounds, repeated to enervating effect throughout, as the guttural cry of humanity that the characters cannot express in their own voices. As “models,” the actors cannot incarnate their characters in the usual ways. These are not nuanced performances, with actorly ticks and tricks. Bresson doesn’t allow such expressiveness. But displacing the characters’ emotions onto inanimate objects like the armor has its own poignancy and power.

One of the film’s most brilliant sequences shows a riderless, seemingly panicked horse, racing through the dark forest. The camera twice pauses on a riveting image of a dying knight, blood spraying from his punctured armor. Another is the final scene in which Mordred’s forces, hidden in trees, attack Lancelot and his men with arrows. The last shot shows a pile of armor-clad bodies, a gruesome heap that recalls the masses of bodies seen in Nazi atrocity footage. This tableau of humankind as ultimately little more than a twisted mass of blood and steel is perhaps Bresson’s definitive take on the human condition. Unlike Fontaine and Jost, these men don’t escape. 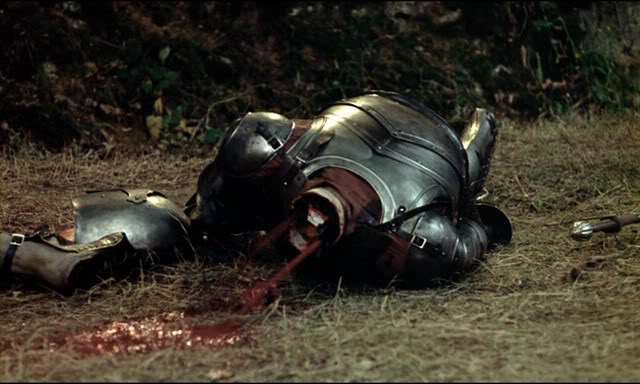 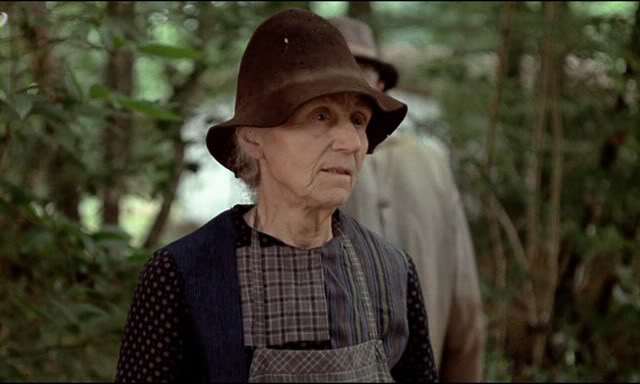 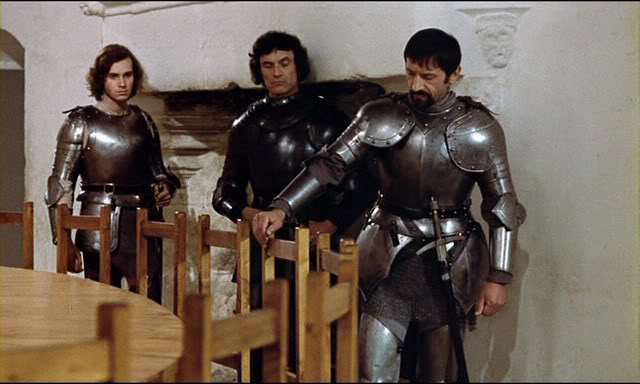 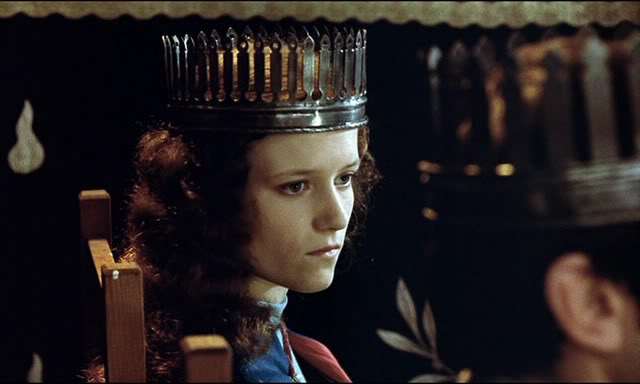 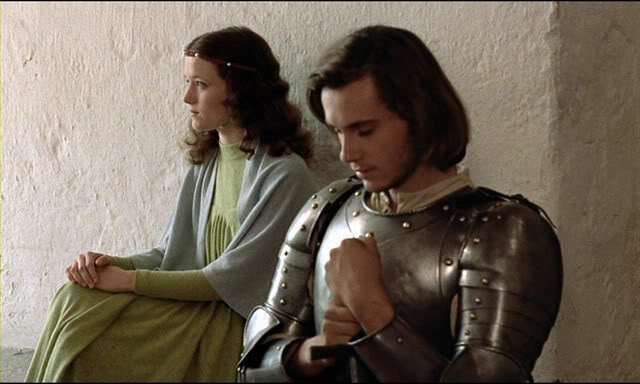