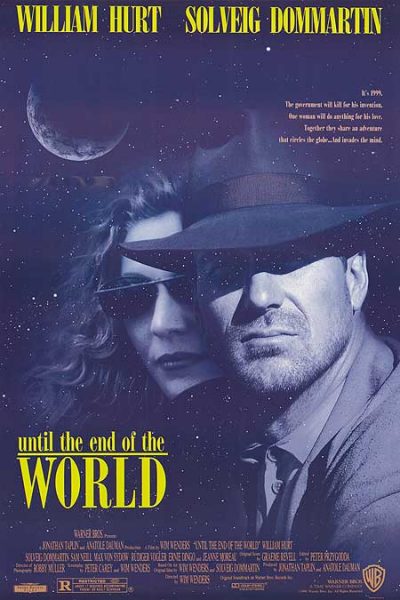 Plot Summary: Set in 1999, a woman (Dommartin) has a car accident with some bank robbers, who befriend and enlist her help to take the money to a drop in Paris. On the way she runs into another fugitive from the law (Hurt), an American who is being chased by the CIA. The charges are false, he says, that they want to confiscate a device his father has invented which allows you to record your dreams and vision. On the run from the bank robbers and the CIA, they span the globe, ending up in Australia at the research facility of his father (von Sydow), where they hope to be able to play back the recordings Hurt has made to his blind mother.

Review:
“German director Wim Wenders, who soared on angel’s wings with his 1989 “Wings of Desire,” now turns his Wimsical gaze toward the impending millenium in the haunting, enchanting “Until the End of the World.”

Wenders reminds us that century’s end is the very near future. “Nineteen Ninety-Nine was the year the Indian nuclear satellite went out of control,” intones the narrator of this screwball, sci-fi noir love-triangle epic. And the whole world is whacked out with fear of nuclear doom, except for Claire (Solveig Dommartin), a French gamine who is “living her own nightmare” and waking up in lots of strange places.

Avoiding the panic-choked highways of Paris, Claire takes the road less traveled — and skids off of it. As the movie unwinds against a background of world apocalypse, Claire’s accidental detour kickstarts an absurd, absorbing road movie that bounces from continent to continent. Venice, Paris, Berlin, Lisbon, Moscow, Beijing, Tokyo, San Francisco and Perth all meld into one city, sharing what seems to be a Euroamericanasian world economy.

Having become a not-unwilling accomplice to a pair of rakish French bank robbers, Claire finds herself on the road, pursuing Sam Farber, an enigmatic American biochemist (William Hurt), while being pursued by a former lover and novelist (Sam Neill), who is also the film’s narrator. A high-tech bounty hunter (Rudiger Volger) is hounding them all.

By the turn of the century (and, perhaps, the end of the world), as Claire and company find themselves in the beautiful blank places of the Australian outback, the movie has metamorphosed into another movie altogether.

In Australia, Farber is reunited with his father, a brilliant German scientist who has invented a camera system that will enable his blind wife (Jeanne Moreau) to see in a variant of virtual reality. Claire and Sam are drawn into the experiment, and ultimately use the technology to project the contents of their own minds, their childhood memories and dreams. Soon they’re addicted to their high-definition lysergic visions.

For all its casual globetrotting, the film moves at a graceful pace. Wenders waxes witty and occasionally wistful about the way things are going, envisioning a future outfitted with amusing Jetsonian gadgets (talking cars, LCD sandwich boards, portable videophones) and beset with “Blade Runner”-ish urban graffiti grunge. The director indulges his utopian and new age impulses: After the collapse of civilization, Claire and her group of high-tech world citizens share the same hand-crank pickup truck with a group of aborigines.

The film is powered by the bleak beauty of its city- and landscapes, and the unique character of each of the performers. Though he began the project in 1977, Wenders evolved the off-the-wall, off-the-cuff script as a vehicle for girlfriend Dommartin. With her husky voice, Dommartin is like a French Kathleen Turner, which is sometimes a good thing, sometimes not so good.

The scenes are bathed in a brooding soundtrack, including new songs commissioned from thoughtful college radio favorites such as R.E.M., U2 and Patti Smith. Their contributions are of a piece with Graeme Revell’s score, dominated by string bass, elegiac cello, anxious synthesizers and pygmy chants.

It’s a stunning experience that leaves the viewer disoriented, maybe even confused, but certainly entertained and somehow hopeful. A striking realization arrived some time after the end of the movie: Wenders took us around (and out of) this world, from the brink of doom to salvation, without resorting to violence.”