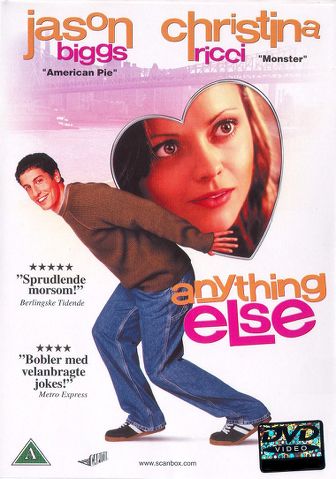 A young artist struggling with his career and his muse is getting more than a little aggravation from Cupid in this romantic comedy written and directed by Woody Allen. Jerry Falk (Jason Biggs) is a promising 21-year-old comedy writer living in New York City. While Jerry has talent, he’s having a hard time getting his career off the ground, which might have something to do with the fact his agent Harvey (Danny DeVito) is a well-meaning, but ineffectual, blowhard, and his mentor David Dobel (Allen) is an increasingly paranoid eccentric whose twin careers as a teacher and standup comic are both floundering. Poised at the top of Jerry’s mountain of anxieties is his relationship with his girlfriend Amanda (Christina Ricci); from the first moment he saw her, Jerry has been in love with her, but Amanda’s multiple neuroses, fear of commitment, and frustrating intimacy issues make her all but impossible to be around. Jerry is approaching his breaking point when the small flat he shares with Amanda becomes home to a third roommate — Amanda’s mother Paula (Stockard Channing), who has decided to come to New York to chase her dream of becoming a cabaret singer. Anything Else also features supporting performances from Jimmy Fallon, William Hill, and jazz vocalist Diana Krall. — Mark Deming @ allmovie.com